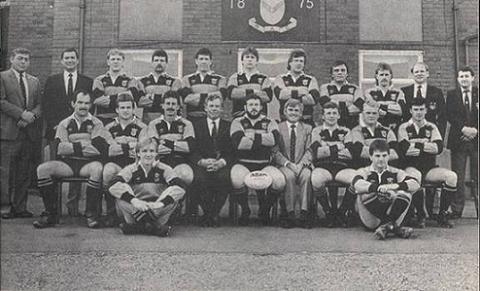 1987/8 became a season to forget with problems both on and off the field. Mike Watkins severed his connections with the club and there was an unprecedented spate of injuries. Watkins had informed the Committee that he did not wish to stand for re-election. He would probably have stood if he had been unopposed with full support of all players. Paul Turner had accepted the vice captaincy but then decided to join London Welsh. New players were centre / outside half Chris Morgan – son of former Newport and Wales player Harry, utility backs Gary Abraham (Glamorgan Wdrs) and Gareth Hardacre (Ebbw Vale), centres Andrew Jewitt and David Wood, hooker Mike Shugar (Glamorgan Wdrs), lock Mike Arthur (Bristol North) and try scoring wing John Thomas from Caldicot.

New captain Rhys Morgan was injured and advised to take a long rest from rugby. It was left to flanker Roger Powell to take up the reins but within weeks the Newport pack – arguably one of the best in the country – was decimated with injuries to Frank Hillman, Wayne Rendall, John Widdecombe and Andrew Perry with Robert Young and Alan Williams both suspended after being sent off – young never played again for Newport after being sent off vs Aberavon on Nov 14th 1987. Williams had been sent off vs Cardiff on Oct 3rd 1987.This left only 3 of Newport’s match winning pack – Powell, Waters and George. Further injuries followed to Nigel Callard and Shaun McWilliam. Coaches Tony Faulkner and Roy Duggan and acting captain Roger Powell resigned after beating Llandovery at home on Nov 21st 1987. Keith James and Jim McCreedy stepped into the breach and Powell eventually returned before leaving once more before the end of the season. He played for Rhymney and Cross Keys but was to return again in the future. in 1988/9 Rhys Morgan returned to pass Keith Poole’s record of 486 appearances and passed 500. Towards the end of the season players Chris Scott (flanker) and Gary Abraham (outside half) gave hope for the future as did the play of fullback Jon Callard and flanker Glenn George.

Jon Callard was top points scorer on 218pts and also top try scorer with 24 tries – a club record for a fullback for Newport. Marc Batten scored 17 tries and scrum half Nigel Callard equalled the club record of 6 tries in a match in Newport’s 50-6 win vs Penarth in Sept 1987.
Frank Hillman was awarded the Boucher Cup and Rhys Morgan the Webber Bowl.