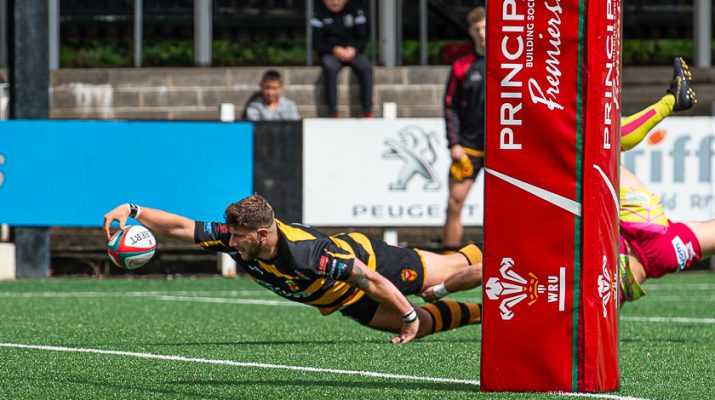 There was a very autumnal feel to the day, seeming more like late October than the middle of the cricket season. Heavy rain and gale-force winds had prevailed for the previous 24 hours. Indeed, one downpour, just before 2pm at Sardis Road, was so heavy that one wouldn’t have been surprised to see Gene Kelly twirling an umbrella whilst cavorting with one of the floodlight towers.

Pontypridd opted to field two different starting teams for each half while Newport chose to name a starting XV then roll the substitutes on and off. Joe Bartlett was named as the captain for the day for the Black and Ambers while there was another interesting selection with Jonny Morris, famed for his wing antics, taking the outside centre berth alongside new recruit Adam Jones at 12.

Pontypridd outside half Ben Jones started the game by kicking towards the clubhouse end. Pontypridd were decked out in their alternative shocking pink and greeny-yellow strip (think Swizzels Strawberry Refreshers), while Newport wore the traditional black and amber hoops. Newport knocked the catch forward allowing Pontypridd a chance to go through the phases. Newport’s defence was solid until Jonny Morris, after making a smash tackle in midfield, was judged to not roll away from the tackle area. Pontypridd kicked to about 15 metres out but Ponty’s line out spluttered and Newport gained, firstly, the scrum then a penalty as the hosts turned and squirmed at the set piece.

A shortened line out from Henry Palmer allowed Andrew Mann to set up a drive. A half-break from Adam Jones in the centre made some more ground while new recruit Josh Guy fizzed the ball around as he tracked from ruck to ruck, keeping Newport’s runners fed with possession. Neat hands from Kyle Tayler kept the move alive until Dai Richards, back from his sojourn in the land of the long white cloud, shredded the Pontypridd back line with a scintillating show and go. He found Josh Skinner galloping on his left along the wing. Skinner aimed for contact, securing a penalty as he went as the hosts infringed. Haydn Simons punted the ball to the corner for Joe Bartlett to gather the lineout ball. A few phases later and Kyle Tayler managed to slip a tackle and crash over just to the right of the posts for the game’s opening try. Haydn Simons added the conversion to make the score Pontypridd 0 Newport 7 with seven minutes played.

Newport contrived to fumble the kick-off again but centre Corey Sheppard was over-optimistic for Ponty as his grubber kick bimbled harmlessly into touch. However, Morgan Burgess was unable to hold onto the throw and gave the hosts the initiative back. Newport threw a black and amber blanket up in defence as Ponty were forced to regroup. A conceded penalty gave the hosts a good chance to go to the corner but the opportunity was somewhat squandered. Outside half Ben Jones dinked the ball ahead but Joe Bartlett was on the ground to cover it. Haydn Simons booted the ball clear but only as far as dangerous wing Dale Stuckey. Stuckey ran back at Newport, getting into the visitor’s 22 before off-loading. The ball worked left to flanker Morgan Sienawski who managed to cross in the corner. Newport’s Dai Richards seemed convinced that the scorer had stepped into touch but the referee, Mr Craig Price, had no touch judges on this occasion so was officiating everything and didn’t see any aberration. The conversion was missed making the score Pontypridd 5 Newport 7 on 13 minutes.

Almost from the restart, Pontypridd’s Ben Jones put in a cheeky, but effective, chip kick which bounced fortunately for him. He kicked ahead but the ball eventually rolled dead on Newport’s five metre line on the Terrace side. Newport cleared the ball away but were back on their heels soon as Haydn Simons let slip a pass which Ben Jones retrieved. He released centres Corey Sheppard and Ryan Davies who kept the Newport backs guessing until scrum-half Tom Rowlands popped up to take the pass and sprint across the line to score. Ben Jones added the conversion to make the score Pontypridd 12 Newport 5 on 18 minutes.

The game was proving a vigorous workout for both squads, far more useful, one would think, than the mass changes, playing three ‘halves’ and rattling seventy or eighty points against a fully amateur team. The intensity was reminiscent of an Indigo Group Premiership game rather than a pre-season knockabout. Ben Jones kicked a penalty into the Newport 22 which Haydn Simons eventually cleared well. Home fullback Lloyd Rowlands didn’t bank on taking the ball then looking up to see Morgan Burgess nail him. The Black and Amber cavalry arrived to turn Rowlands over.

A bobbling ball from a line out popped up to Josh Guy who flicked it onwards to Josh Skinner to batter forward into contact. Ryan Gardner, debuting on the wing for Newport, jinked well and made ground going forward, before the ball worked back right to Adam Jones, recently signed from Cardiff, who made a blockbusting run before reaching out and dotting down for a hard-earned try. Haydn Simons added the conversion to make the score Pontypridd 12 Newport 14 with 25 minutes played.

Joe Bartlett was replaced soon after with a painful-looking hand injury. He was replaced by the more-than-able Dan Partridge for the remainder of the game.

Ponty’s Ben Jones displayed some quality by making a fingertip catch of a low pass and converted it into a useful chip kick for centre Ryan Davies to run onto. Davies hared off at an angle and made the corner for a well-taken try. The conversion was missed making the score Pontypridd 17 Newport 14 on thirty minutes.

It was the nature of the game that both teams wanted to try things under pressure. When a midfield switch move broke down between Haydn Simons and Harri Lang, there was only going to be one outcome. Simple hands from the yellow and pinks saw them draw and pass, draw and pass until wing Dale Stuckey had an overlap to score out wide. Again, the conversion was missed and the score now read Pontypridd 22 Newport 14.

Pontypridd were pressing for another score as the first half came to a close. A penalty had put the hosts into the corner but a big, spoiling paw from Andrew Mann allowed Harri Lang to carry into a central position before Haydn Simons put the ball into touch to bring an entertaining half to an end.

Geraint Watkin replaced Josh Guy at scrumhalf for Newport at halftime as Haydn Simons restarted the game. Newport drew a penalty as Tom Piper was held in a tackle. Unfortunately the lineout went long and Pontypridd could pick possession off; Newport compounded the situation by conceding a penalty for a high tackle.

Ponty were all over a Newport mistake on 45 minutes. The Black and Ambers appeared to be all at sea with new outside half Diggy Bird pulling the strings. An overlap on Ponty’s left was about to be exploited when wing Ryan Gardner picked off Bird’s pass and sprinted 55 metres unmolested for a try. Haydn Simons converted to make the score Pontypridd 22 Newport 21.

Gardner nearly did it again just two minutes later when as pass was picked off but Mr Price went back for a penalty to the hosts. A nice surprise for Newport supporters was the appearance of former Black and Amber Reuben Tucker who, it appears, now reverts to ‘current’ rather than ‘former’ status. Tucker and Josh Reid went on as back row replacements.

Pontypridd nosed ahead again on 56 minutes when a five metre lineout, brought about by multiple Newport infringements, was taken by Rhys Shellard. Ponty settled well at the rolling maul, making themselves comfortable before releasing the ball to scrumhalf Tom Rowlands who, having dummied the ball away, crashed across for a try. The conversion was missed and the score now read Pontypridd 27 Newport 21.

The Newport backs ran through their paces as Dai Richards went on a scything run with Jonny Morris is support. Morris had Lang to his left and fired a pass onwards for Newport to enter the host’s 22-metre area. Newport flitted this position away with a careless penalty. Pontypridd worked hard to let Newport have the ball back but they eventually cleared their lines.

The Black and Ambers hit back on 69 minutes when a particularly unsympathetic pass amongst the Pontypridd backs handed Newport a scrum some 45 metres out. Geraint Watkin moved the ball right before it reached Dai Richards. A flash of the ball and a drop of the shoulder and Richards was through and sprinting away. He found Harry Griffiths, another Summer acquisition, who strode in for a super score. The conversion was missed, so the score now was Pontypridd 27 Newport 26.

Newport were awarded a 75th minute penalty. Haydn Simons punted for the corner. Dan Partridge took the ball as the front jumper affording Reuben Tucker to peel down the blind side before being held. The ball whipped wide, out to the big boys. Garin Harris thumped up the middle, Evan Whitson carried hard before Adam Jones took a turn. Evan Whitson made a lunge at the line before being held up by desperate home defence. Newport took the attacking five-metre scrum but Pontypridd collapsed it. Geraint Watkin rushed his decision to run the ball and was well tackled. Newport retained possession, Evan Whitson making his usual half-hitch step as he took contact but as the ball moved right Diggy Bird, the Pontypridd outside half, couldn’t resist stretching a hand out and knocking on. This, deemed Mr Price, was a bit too naughty to let go, even in the spirit in which the game was being played. The result was a yellow card for Mr Bird and a chance to reflect on his actions.

The scrum reset and moved right. Reuben Tucker picked up and dived over but was disallowed as Mr Price wanted a reset. Maddeningly, the ball bobbled loose from the next scrum enabling Ponty to scoop up and, one might think, see out time. Except that Pontypridd opted to chip the ball away. Dai Richards caught the ball on the full and returned upfield. Reuben Tucker, grinning from ear to ear, took the ball into contact as Geraint Watkin fired the ball out to Haydn Simons. Simons seemed to pause for a half second as the path of least resistance opened up in front of him. He picked through some out-of-position defenders to waltz under the posts for a super try. Simons converted his own score to make it Pontypridd 27 Newport 33 on 80 minutes.

There was time for a restart. Newport took it cleanly then set about securing the win. Pontypridd created little during this time before Newport were able to claim a rare win at the self-titled House of Pain.

It should prove to be a useful run out for both teams. Of course, the result is insignificant really. Pre-season friendlies didn’t officially exist until relatively recently and should only be viewed as part of a team’s preparations for the long season ahead. Both clubs fielded a mix of old heads and eager young pups looking to make an impression. However, the competitor in us all wants Newport RFC to win every game it takes part in! There were facets of play which would have pleased the coaching team immensely but there was enough to concern them too.

There are two more pre-season friendlies to look forward to. Thursday August 22nd sees the ‘Port visit Cinderford RFC, a good club with strong links to Gloucester RFC while Saturday 31st August sees us visit Dings Crusaders RFC who play in the Frenchay area of Bristol. Both games are away, sadly, but enable the coaches more time to tinker with processes and plans before the clubs Indigo Group Premiership opener away at Ebbw Vale on September 7th.

Your City. Your Colours. Your Club