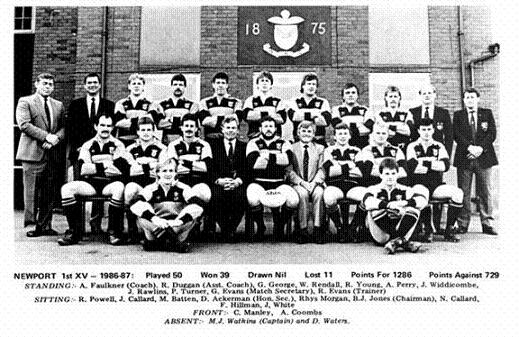 Newport, once more under captain Mike Watkins, won their first 4 games in 1986/7 only conceding 16pts but then followed a 13-10 loss at Pontypool. However Newport then won 21-6 against Neath but at a high cost with no fewer than 7 players injured. Weakened teams then lost heavily to Bath, Swansea, Cardiff and Barbarians. The next two months saw 9 wins and only 2 defeats before a heavy 35-7 defeat at Stradey. Then came a memorable run with 22 wins out of 23 including a first win at Aberavon for 15yrs, a first at Bristol for 10yr and only a second at Bridgend in 13yrs. Record wins were also recorded over Newbridge (52-0) and Pontypool (43-3) but the big disappointment was the Welsh Cup Q/F defeat at Cardiff when the referee refused to give Newport first a “try” by John Widdecombe and then a penalty try for Cardiff collapsing the scrum time and again in the last 5 mins. On March 28th 1987 Newport beat Richmond 59-8 and so took their points total to 1,156 beating the previous record of 1,110 and finally finishing the season on 1286.

It was a season of records – most wins (39), highest points (1286) and most tries (198). This enabled Newport to take the runners-up place in both the Merit Table and the Welsh Unofficial Championship. Four players achieved a century of points – also a club record – Jon and Nigel Callard, Marc Batten and Paul Turner who broke Laurie Daniel’s record with 368pts. Keith James dropped his 100th goal for the club vs Northampton. Debuts this season were made by Bettws boy Mark Davies who would captain the United in later seasons, centre Jeff Howells (Cardiff) and back-row Chris Scott (Lydney). David Waters (46), Glen George (39), Paul Turner (38) and Mike Watkins (38) led the appearances. Rhys Morgan played his 450th game, David Waters his 400th game, Mike Watkins his 200th game and scrum-halves Nigel Callard and Tony Coombes their 100th game.

Keith James decided to retire having made 282 appearances since his debut as an 18yr old in 1970/1 and setting a club record of 101 drop goals. Many felt that he never quite fulfilled his early promise. He played for Wales B but never won his full cap despite switching to Cardiff mid career to link up with Welsh scrum-half Gareth Edwards. He had captained Newport United and would return next season to Rodney Parade in a coaching role.

Jon Callard and prop Frank Hillman were both selected for Wales U21 while Richie Collins who had joined South Wales Police during the season won his first Welsh Cap.

Three tour matches were played in Cyprus in May 1987. Newport won all three scoring 210 pts to 38. Top scorer was Paul Turner with 74 pts from 3 tries and 31 conversions while Jason White scored 9 tries in his 3 matches including 5 vs Army Cyprus and 3 vs Combined Services. Brendan Walsh got a hat-trick vs RAF, Cyprus.