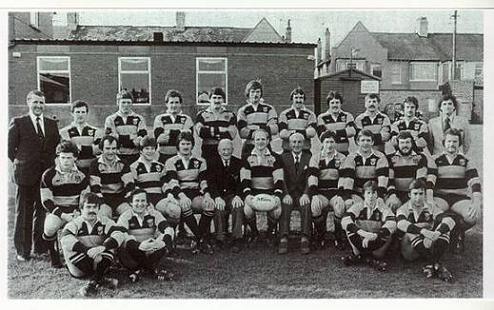 1980/1 under Geoff Evans, leading Newport for a 5th time, started off in fine style with victories over Penarth Coventry and Bath with a young back division. Unfortunately injuries, key player availability and inconsistency meant only 4 of the next 10 matches were won as Newport prepared for the visit of the All Blacks on Oct 28 th 1980. One of the wins was against Gloucester at Rodney Parade by 38-6 in which young wing Robert Ackerman equalled the club record of 6 tries held by Tommy Spittle (1878) and George Andrews (1922). Capt Geoff Evans who had led Newport vs 1973 All Blacks inspired his pack and team against the All Blacks to a magnificent performance only to lose 3-14 largely due to missed kicks and a charged down try. Only 6 wins came from the next 20 matches and there was also a humiliating 3-0 defeat in the 1st round of the Welsh Cup at Penclawdd – the biggest shock in the Cup to date. During this period coach Alan Thomas relinquished his role due to pressure of work and was replaced by David Ford. There were only 4 defeats in the final 13 games and some of the depression over Rodney Parade started to lift. Geoff Evans was hampered by his old knee injury but enhanced his reputation as a player and captain. New players were outside-half Stuart Barnes – a future England and British Lions player. He made his debut on Dec 26th 1980 at the age of 18 yrs 1 mth vs Watsonians and he scored a try after just 1 min 43secs. He added a further try before HT. Cross Keys captain and back-row Kerry Williams relinquished the captaincy and joined Newport and would captain Newport the following season. Wings Nigel Webb and Julian Robinson- brother of Justin were other newcomers as was 2nd row John Manders. Prop Coetzee Badenhurst , a Currie Cup played from Northern Transvaal played 7 games. Other newcomers were full-back Paul Rees (Ebbw Vale), centre Peter Bolland the points record holder from Tredegar and the popular lock John Widdecombe from Torquay. He would make 259 appearances for Newport in the coming season and get very close to winning an England cap. John was one of the most popular and loyal players ever to don the Back & Amber shirt and would week in and week out make the journey from Torquay to Newport and back to train and play. Top try scorer was wing John Churchill with 15 tries while top points scorer was Peter Bolland with 88 pts. 48 players were used and appearances and were led by outside-half Keith James (39), lock / back-row David “Muddy” Waters and hooker Steve O’Donoghue (33). Stuart Barnes won the Boucher Cup and scrum-half Gary Powell the Webber Trophy. He had joined the previous season from Bedwas. Leighton Davies became only the 2nd Newport player to reach 900pts – after Norman Morgan (951). He ended the season and his Newport career on 923pts from 181 games and played the following season for Penarth RFC. Geoff Evans played his 300th game for Newport which would have been so many more but for injuries and prop Jim Dale his 200th game. Lock Jeff Watkins retired after making 381 appearances for Newport since his debut in 1967/8 and also Geoff Evans finally retired. He had been captain for a record equaling 5 seasons (Will Phillips had captained Newport for 5 seasons ca 100 years previously in 1877-1882. Geoff’s career was blighted by injury and he was so unlucky only to have played for Wales B rather than winning a deserved cap. He had also led Newport vs three touring teams – Tonga, Fiji and New Zealand. Geoff had made 313 appearances since his debut in 1970/1.

Robert Ackerman was picked to play for Wales vs New Zealand. Colin Smart regained his England place and played vs Ireland, Scotland and France, wing John Churchill won a Wales B cap while David Waters and youngster Stuart Barnes were part of Wales squad. Geoff and Gareth Evans played for the Barbarians 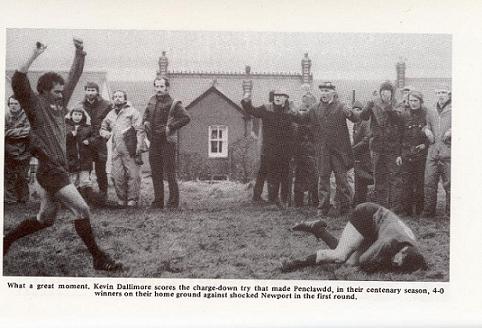