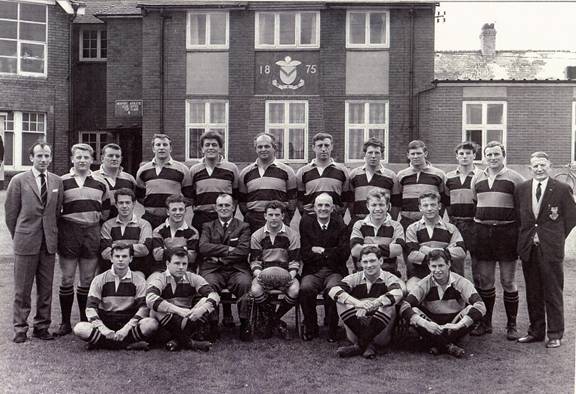 Newport was a much changed side in 1964/5 under new captain David Watkins but in the end after a few ups and downs it turned into a very successful season with a number of new records being set. A notable newcomer was back row Paul Watts from Abertillery – he had played with internationals Alun Pask and was to give Newport great service in the years to come. Other newcomers were centre Ivor Taylor and the identical twins David (outside-half) and David (scrum-half) Rogers. David would play fro Newport up to 1980 – a great servant. They would be the first ever twins to play for the club and David was to play for many seasons and be a great servant.
The season started with wins against Penarth, Bristol and Pontypool but then suffered big defeats to Neath (H) and Swansea (A). This was Neath’s biggest win at Rodney parade and Swansea’s biggest win over Newport for 26 years. Worryingly Newport had conceded 10 tries in the first 5 games but then after the St Helens’ defeat they won the next 18 games and were unbeaten up to the 3-6 defeat at Coventry on Jan 15th 1965 when they were without S Watkins, J Uzzell, D Watkins and B Price as they had been selected to play for Wales vs England the following day. A huge blow was the loss of international back row John mantle to St Helens RL. Mantle had been a key player but Newport were fortunate to have the services of promising Paul Watts who joined soon after from Abertillery. Newport then took Cardiff’s unbeaten home record in a game which saw the welcome return of centre Gordon Britton after an 18 month lay off due to injury. He was the first player to cross the line at Arm’s Park that season and he made a try for co-centre Dick Uzzell. Meanwhile full-back Ray Cheney was racking up points with his excellent place kicking. He reached 50 pts in just 7 matches and passed 100 in 15 games. He then broke his own club record of 171 in his 27th game when Newport recorded their biggest ever win over Leicester 30-10. Another record to go during the season was the points record of 661 in 40 games by Fred Birt’s 1919/20 team. The record fell in the 40th game but Newport actually lost that game 11-14 at home to Cross Keys. Interestingly the best average points by a Newport team was 18 (540 pts / 29 matches 1892/3) and this season they finished with 716pts from 45 games ie an average of 16.

During the season Newport suffered with many calls for players for Welsh trials and matches and on Dec 5th 1964 they went to Bristol who are always strong on their own pitch with a seriously depleted side. They fielded 9 reserves including centre Graham Griffin and wing forward Peter Moyle making their debuts, long serving prop Ian McJennett played his first game of the season in what was to be his last season before retiring. He would become one of Newport RFC’s most successful coaches. Former Wales international Haydn Mainwaring made his first appearance of the season. Newport not only won but won impressively 25-3 in one of the shocks of the season. Injuries played their part during the season – prop Nev Johnson had to withdraw from a Welsh trial, Bob Prosser had a reoccurrence of his old finger injury and David Watkins injured his shoulder in April.

David Watkins led Newport’s 7 to the Seven-a side title at Swansea – their 8th from 12 tournaments. This was one of the great 7’s teams of S Watkins, G Britton (a great 7’s player), D Watkins, W Prosser, B Price, B Perrins, A Thomas. They beat Ebbw Vale, Llanelli, Cardiff and Newbridge in the final 9-8 with Brian Price scoring the winning try.
Ray Cheney was leading points scorer with a record 224 pts while peter Rees (22) and Stuart Watkins (19) lead the try scorers. David Watkins dropped 10 goals and scored 10 tries as well as kicking 2 p’s. Bob Prosser (43) missed just 2 games due to his old finger injury and Ray Cheney (41) and Keit Poole (40) were the other players to make 40 or more appearances.

Wales won the Triple Crown and Stuart Watkins John Uzzell, David Watkins and Brian Price played in all 4 of the 5 nations matches. 2nd row Bill Morris made his Wales debut vs Scotland while David Watkins, Brian Price and John Mantle were in the losing Wales team vs South Africa. 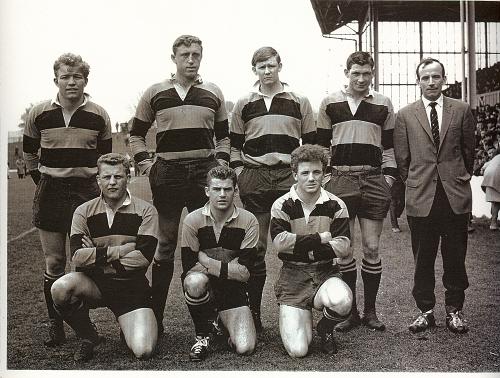