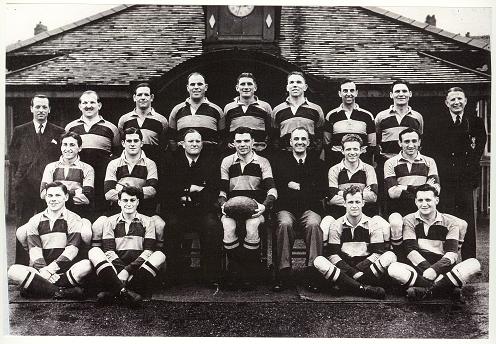 Rhymney born RT (Bob) Evans was chosen to lead Newport RFC in 1951/2 season. He was considered by many at the time to be one of the finest wing forwards. He was a very intelligent player and read the game well and continually posed problems for the opposing halfbacks and centres. He had played for Wales including all matches in Wales’ Triple Crown of 1949/50 and in 1950 played in all test matches for the British Lions in Australia and New Zealand. The previous record breaking season would be difficult to follow but the tam rose to the occasion and set a post-war club record of 584 pts in 43 games. This was nearly 14pts per game ie almost the same as previous season when 538pts were scored in 40 games. 125 tries were scored compared with 114 the previous season. Only twice before had this number of points been beaten – in 1919/20 under Fred Birt (661pts / 39 games) and 1920/1 under Reg Plummer (609pts / 44 games).

Although the season was highly successful, many felt that it did not quite match the previous season when so many players played with flair and abandon. However Newport RFC were still one of the most attractive and consistent teams in the country and only 4teams managed to beat them – Cardiff (4), Neath, Cambridge University and the touring Springboks (6-12). Incredibly Newport had beaten Cardiff 3 times and drawn the other match and not even conceded a single try in the previous season but this season they lost all 4 matches ! Worst still was that Cardiff took Newport’s unbeaten ground record on Dec 15th – the record had stood for 21 months. Newport were not at their best against South Africa and Ben Edwards played the 2nd half with a dislocated collar bone. Roy Burnettt did some great tactical kicking but the better team were South Africa and they played probably their best rugby to date on that day Jan 10th 1952 and their forwards and fine scrum-half Du Toit gave them a distinct advantage. They scored 4 tries to Newport’s try by back row H Tovey and a penalty by Ben Edwards. The game was watched a by a reputed 31,000 at Rodney Parade which was the highest ever gate seen there.

Tragedy struck in the 10th game of the season when captain Bob Evans’s career ended at Abertillery on Nov 3rd 1951. Newport won 3-0 thanks to a try by Evans but sadly he would never gain play rugby for Newport and so ended a truly distinguished playing career although Bob was to give great service as a Chairman and committee member of the club.

Jack Davies of South Wales Argus wrote : “He was not a brute-force spoiler but a student of tactics, as clever in attack as in defence. It was an education to watch him manoeuvre opposing half backs and centres into false positions, often without his having to lay a hostile hand on them”. Once again Roy Burnett was asked to be caretaker captain and once again he rose magnificently to the occasion. He onll missed 1 match of the 43 played. These days he was a marked man but ably supported by scrum-half Billy Williams who had a super long pass to give him a bit more room, he had a fine season. These half backs ensure that the wings got plenty of ball and that fine wing John Lane scored 32 tries in his 33 games – only Arthur Gould in 1892/3 had scored more in a single season. He outscored right wing Ken Jones who only scored 9 tries but played in right wing Ken Jones who only played in 18 games. Loyal clubman Graham Ross often stood in for Jones and he scored the same number of tries ie 9 from his 16 games. Malcolm Thomas was the best centre in spite of his tiring trip with the British Lions to Australia and New Zealand and he played a major part in helping Wales win the Triple Crown during the season. Bryn Williams (31 games / 10t) gave good support in the centre as did the often erratic Hedley Rowland (21 games / 12t) although the centre play probably wasn’t as good as for the previous season. The backs appearances were led by Burnett on 42, Billy Williams 34, Bryn Williams 31, Malcolm Thomas 29 and full-back Bob Hughes 28.

The forwards produced their usual efficient play but a number were coming towards the end of their careers but Ian Ford was starting to make a name for himself and was to have a long and distinguished career into the next decade and a young hooker – a certain Bryn Meredith – made his debut and played 5 matches. What a great player he was to prove to be in the coming years. The front row of Tom Sterry, Lyn Davies and Geoff Hirst were often the mainstays but Doug Ackerman and Peter Davies played consistently well as always and it was surprising that these two great players never won caps for Wales. Peter Davies, Sterry and Ackerman played 39 of the 43 matches while Lyn Davies and LET Jones played 35 games. Once again Ben Edwards was leading points scorer with 116 pts from 31c and 18p followed by John Lane with 96pts from his 32 tries. Roy Burnett scored 9 tries and dropped 7 goals.

Former Newport player John Gwilliam captained Wales in the 5 matches played which included South Africa (L3-6). The 5 Nations was won and Ken Jones, Malcolm Thomas played in all 5 matches. Billy Williams got his deserved cap and partnered the great Cliff Morgan vs Ireland and France.