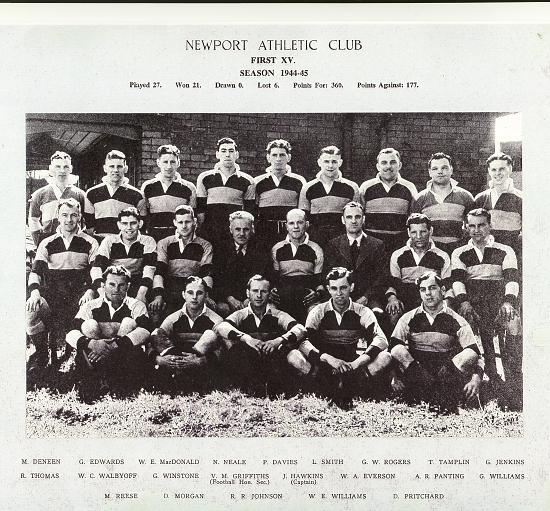 Newport RFC had played 27 games during Season 1939/40 up to May 4th 1940. Bunner Travers had been selected as captain for 1939/40 but he only played 4 games before Christmas 1939 and 1 in March 1940 as he, like most of the Newport pack as well as full-back Harold Isaacs, had joined the First Monmouthshire Regiment and was therefore on military duty.

Newport RFC had every reason to be grateful to a number of people who kept the rugby club ticking over through the war period – Bill Everson, Jim Hawkins, Harold “Nan” Saysell and Alf Panting. All four were to prove to be great servants to Newport RFC for many years to come and during the war period they organised charity games and other games against other local XV’s. Nan Saysell, a former Pill Harriers player took over the promotions of inter-service and charity games and he was ably assisted by Jim Hawkins and Alf Panting on the field. There were a number of ad hoc Newport XV / Newport Police XV games involving Jack Adams, Bob Allen, Jack Bale (later taken prisoner in North Africa before escaping and making his way back to UK) , Jim Collins, Les Evans, Len Gill, Jim Hawkins, Ron Herrera, Jack Jerman, Des Kelly, D Ralph Morgan, Alf Panting, Harry Phillips, Reg Plummer, Tom Tamplin, Ron Voyle and Jack C Wright. Ewart Tamplin playing also occasionally for Cross Keys XV. Many of the Newport players were part of the then Newport Borough Police. The Newport XV also included those Newport Saracen players who were not in HM Forces. These players helped to keep the rugby flag flying in Newport.

In 1944/5 Newport RFC welcomed back a number of players who had played before World War 2 and these included Ernie Coleman, Jim Hawkins, Bill Hopkin, Les Smith, A David Price, Ewart Tamplin and brother Tom, Bunner Travers, Glyn Williams and Gordon Winstone. Sadly one former Newport great – John R Evans ex-Newport and Wales captain (he captained Wales on his debut in 1934) would never again be seen at Rodney Parade having lost his life in the war. He was killed in action in North Africa on March 8th 1943.

The first few years after the War were somewhat experimental and disjointed with an interesting list of fixtures including Cardiff Medicals, Brecon Infantry Training Corps, Filton (Bristol) and Rotol (Gloucester). Only 27 games were played but no fewer than 52 different players turned out for Newport including a certain auburn haired outside-half called Roy Burnett, who played just the 1 game vs Newbridge on March 12th 1945. He was on the losing side but who knew then that he was to be become one of Newport RFC’s truly great post-war players.
On October 21st 1944, rugby for Newport RFC resumed with a visit to Wasps at Repton Avenue, Sudbury, London. Newport went down to a narrow defeat by 6 pts (1p,1t) to 8 pts (2t,1c). Newport scorers were Les Smith try and Sgt Tucker penalty. Newport then lost at home to Bristol by 8-16 but would only then lose a further 4 matches (St Marys Hospital, Newbridge (2), Cheltenham) throughout the whole season. Doubles were recorded vs Abertillery, Brecon TC, Filton, Newbridge, RAF XV and Rotal. Newport even played 3 games against the old enemy Cardiff and won all 3 – if only they could have played 4 matches that season ! The only home defeat was vs Bristol by 3-8. There was a notable win at Rodney Parade against the New Zealand Services by 18-15 and 7 Newport players then turned out for Monmouthshire as they beat the Kiwis at Pontypool Park with Hedley Rowland scoring a hat-trick of tries – 2 from interceptions. WC Walbyoff, a centre / wing joined from Abertillery and what an impact he made. He played in 26 of the 27 games and scored 20 tries and kicked 5 conversions to end up as the club’s top scorer with 70 points. Scrum-half and captain Jim Hawkins – he also played some games at fly half – proved invaluable and was the next leading scorer on 43 points from 6 tries, 3 cons, 1 pen and 4 drop goals.

Although a number of pre-war players had returned, it was essentially a new team and three of the newcomers were to give great service to Newport RFC in the coming years. Gwili Jenkins, a centre from Swansea, who would later switch to full-back with tremendous success – captaining Newport and playing 106 games for Newport up to 1950. Interestingly his cousin, scrum-half Onllwyn Brace would later join Newport and play for Wales in the 1950’s. Graham Ross, a wing who was unlucky not to be capped for Wales and who scored 61 tries in his 130 games up to 1957. A Hedley Rowland, centre, who was to be an inspirational player and Newport captain in later years and scoring 93 tries, 4 cons and 6 drop goals in his 136 games up to 1952 and again a player so unlucky to suffer from illness and injuries during his career and just missing out on that elusive Welsh cap although he was a Welsh Reserve. Hedley was an acting Major in the First Parachute Regiment and was in the first airborne division to go into France. He served in Italy and Holland and fought at Arnhem and was awarded the Croix-de-Guerre medal for bravery by the French government.

Other players to catch the eye were full-back D Ralph Morgan and hooker Reg Blakemore. Morgan would become a Welsh Probable Trialist and Blakemore would win his cap in 1947. He then turned professional and went “North” and joined St Helens where he played for 8 seasons and helped them win the Cup in 1953. He also played for Wales Rugby League.

The curtain came down on the season on April 21st 1945 when Newport trounced Rotol team from Gloucester by 41-15 with wings Billy Williams and WC Walbyoff each running in hat-tricks of tries.