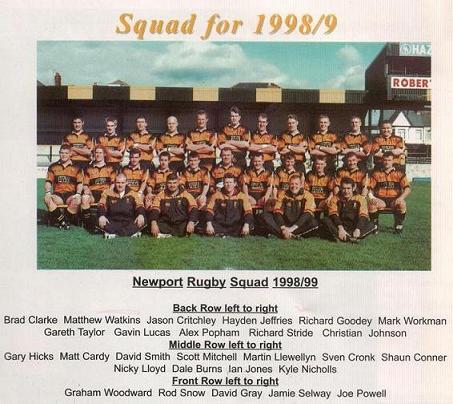 Newport director of Rugby, Allan Lewis (former Wales backs and Moseley coach) found himself in the Premier rather than Division 1 with the decision of Cardiff and Swansea to play “friendly” matches in England with the hope of being part of a future British / English League and so Newport were reprieved from relegation. Lewis had been looking mainly to develop youngsters in Divison 1. Lewis said “I’d rather be on the dance floor because that way you are nearer the band” adding “I must be the best coach in the country because I’ve only been here pre-season but we’ve already been promoted!”

Sven Cronk was appointed captain for season 1998/9 and Tony Brown was appointed Chief Executive and would figure dramatically in the coming seasons. Internationals Ian Gough and Jan Machacek left. Gough went to Pontypridd as he expected Newport to be relegated and Machacek to Sale. However with each Premier side receiving £300,000 from the WRU they could at least buy some players. Newport bought Brad Clark a flanker from Wellington NZ and Matt Cardey, a full back / wing with Welsh grandparents from North Harbour, NZ. Other players to join included prop Ceri Jones, son of former Newport and Wales B lock Lyn, Welsh Rugby League international wing Jason Critchley (Castleford RL) and Canadian international centre Kyle Nichol. What was to prove to be an excellent signing was back-row / lock Joe Powell who was to give sterling service to the club and another good signing was NZ born scrum half Steve Moore. Future Welsh international back-row Alix Popham made his debut as did former Welsh international back rows Stuart Roy and Andy Gibbs (Newbridge / Llanelli). Another newcpmer was speedy wing Alan Harris (Swansea).

Clark and Cardey did well during 1998/9 as did Nichol from time to time. Critchley returned north after just 8 games and no tries. The end result was another poor season for Newport. Newport were 6th in the league before the play-offs. This was another brain wave from the WRU whereby the top 4 played each other home and away as did the bottom 4. Newport only managed 1 win from their 6 play-off matches and slipped to 7th in the final table with only Aberavon beneath them. Newport’s 5 wins came from Aberavon (A) and (H), Ebbw Vale (H), Bridgend (H) and then Aberavon (H) in play-offs. Newport won at Llanharan in Welsh Cup with lock Gareth Taylor being red-carded on 59 mins. They then crashed out at St Helens, Swansea 38-60 but did play some good rugby with Kyle Nichol getting a hat-trick of tries.

Matthew Watkins played in 20 league matches and was the only player to do so in the whole Premier League. Interestingly the most used substitute was hooker Ian Jones with 15. He played in a total 33 matches followed by Sven Cronk with 31. Matthew Watkins scored 14 tries and Matt Cardey 9 tries. Leading points scorer was Shaun Connor with 194pts followed by Scott Mitchell 186pts. The low point of the season was losing to Caerphilly 5 times – 4 league and 1 Euro Conference match.