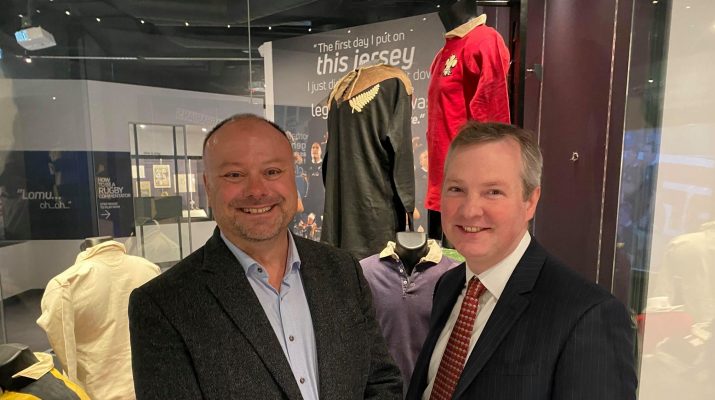 His face was waxen, his life draining away. Charlie Pritchard opened his eyes one last time and spoke in an urgent whisper.

“Have they got the Hun?”

“Yes, Pritch. He is in all right,” came the reply.

Charlie Pritchard was one of the greatest sportsmen of his generation. This formidable Newport forward was at the heart of an exceptional Welsh team during a ‘golden age’ for Welsh rugby at the start of the twentieth century. This included being part of one of the most famous rugby matches of all time, when Wales took on the newly dubbed ‘All Blacks’ in December 1905 – and won.

A few years later, Captain Charles Meyrick Pritchard would, like so many others, pay the ultimate price in August 1916 on the battlefields of the First World War, leaving behind young sons and his pregnant wife – his baby daughter Florence was born a few months after his passing.

But his rugby legacy did not end with him on the Western Front. It seemed that Charlie had gathered a unique collection of shirts during his time as a player. Peter Jones was working on another book, Newport Rugby Greats, when he heard talk of the shirts. With further investigation and talking to Charlie’s family, he discovered that this very special collection was still intact. In February 2020, coinciding with the publication of this book, the shirts will be going on public display at the World Rugby Museum in Twickenham for the very first time.

Each and every one of the seventeen shirts in Charlie’s collection tell a story, and in this book, Peter Jones – by his own description, ‘a rugby mad, World War 1 geek’ – unravels the threads of each of those stories. In the process, the book takes us on a journey that tells us of some of rugby’s greatest moments, and timeless, heroic characters, on and off the pitch. There are shirts from Wales, Scotland, England, Ireland, France, the Springboks, the All Blacks and of course Newport RFC – all of (rugby) life is here.

The book and exhibition will be launched at The World Rugby Museum, Twickenham Stadium on Wednesday, February 5th where representatives of Newport RFC will be present.

There will also be a special event, featuring some of the shirts and with a talk by Peter Jones, held at 1pm before the match fixture between Newport RFC and Llandovery RFC (KO 2.30pm) at Rodney Parade in Newport on February 16th. The book will also be exclusively on sale at that match from Friends of Newport Rugby Trust, priced at just £9.99

If you would like to reserve a copy, email Kevin Jarvis – commercial@newportrfc.co.uk

The book can also be posted to you. Again, contact Kevin Jarvis for details: mailto:commercial@newportrfc.co.uk

Celebrate the life of one of our clubs most talented and heroic players by getting a copy of this publication for your collection.