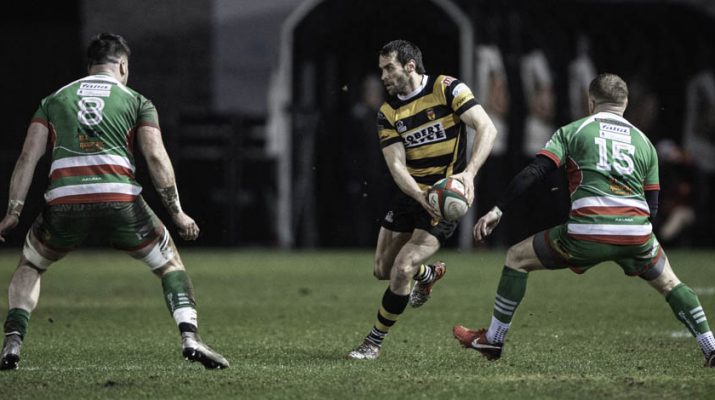 Three weeks ago, Newport welcomed the Scrum V cameras to Rodney Parade on a cold January Friday by the Usk. Aberavon were the visitors and the Black & Ambers came agonisingly short of a victory, a story which the supporters had suffered on a few occasions already this season.

Three weeks later, the B&As returned to the Theatre of Dreams in their first outing since that clash. Ebbw Vale were the visitors, coming off an impressive win against Pontypridd a couple of weeks prior and having re-signed former outside-half Rhys Jones earlier this month.

After many shortcomings this season, this couldn’t have been different this evening. Although it was the Steelmen who opened the scoring with Jones’ boot, Newport took firm control of the match after that. Taking firm control of the ball was another matter however, with the wind and rain forcing the home side into four knock-ons in the just first 20 minutes, most of which in good positions.

But shortly into the 2nd quarter, a free ball in Ebbw’s 22 lead to a Matt O’Brien’s loop pass to Jon Morris on the wing who touched down in the corner for Newport’s first score of the evening, with OB’s boot adding the extras.

The visitors were struggling with any kind of attack: Rhys Jones, usually accurate with his place-kicking saw one of his efforts from the halfway line go dead, and some robust Ebbw pressure shortly before the interval was destined for a try of their own, but the B&As managed to steal the ball and second-row Joe Bartlett did the honours of booting the ball (somewhat) free from danger.

O’Brien added a penalty goal with the final kick of the half to give his side a one-score lead going into the changing rooms.

Matt O’Brien has always been one for his showmanship, no matter the conditions! Be it a tactical cross-kick, a little dink or a cheeky grubber, OB is always looking for opportunities and pulled off the latter shortly into the second half which was met by Harri Lang in the corner for Newport’s second of the evening.

Ebbw Vale responded with some more pressure for the city side to deal with: their drive towards the B&As’ try-line lead to a knock-on then subsequently a Newport penalty much to the delight of the home crowd, shortly after Rhys Jones’ penalty attempt fell short, with the conditions obviously making it difficult.

The Black & Ambers almost made the visitors pay when another OB kick into the corner was caught by an Ebbw defender who was pounded by Lang into touch, and an OB cross-field kick was almost pounced on by Jon Morris to make the victory certain.

But the victory was soon confirmed when the deserved Man of the Match, Elliot Frewen, broke three tackles dancing through the opposition defence, before feeding Louis Jones who managed to stay on his feet amid desperate Ebbw defending, before feeding the hand of ‘God’, or Geraint O’Driscoll, who dived over for Newport’s third of the evening. This would certainly have been a contender for Try of the Week.

A high tackle on Frewen late-on meant Vale’s Aaron Graham spent the rest of the evening in the bin and the B&As held on to record their first home victory of 2020 and only their second at their fortress all season.

Newport now sit 11 points from the drop with three games in hand over bottom-club Bridgend and only seven points behind RGC 1404 in 6th place with a game in hand.

The B&As only have six days to prepare for the visit of Swansea on Thursday evening (6 February, KO 7.45pm) before Llandovery make the trip to Rodney Parade on Sunday 16 February (KO 2.30pm).