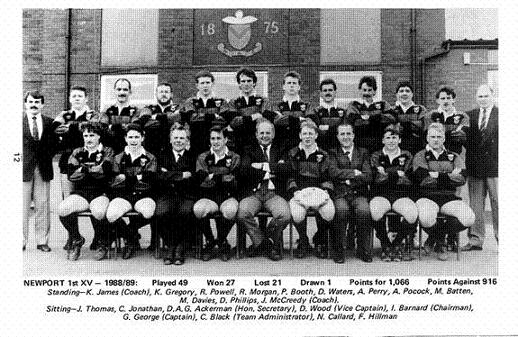 Narrow defeats vs Coventry, Pontypool (A), Swansea (A) and Gloucester could easily have been wins. A good run then ended with a last minute defeat at Pontypridd. A draw with Bath 21-21 was followed by a defeat vs Newbridge and a further home defeat in 3rd round of Welsh Cup against Newbridge. However with some players returning from injury – although vice capt David Wood suffered with knee problems – things improved later in the season and a run of 8 wins was achieved vs Glamorgan Wdrs, Ebbw Vale, London Welsh, S Glam Institute, Moseley, Aberavon, Llangennech (Cup) and Cross Keys and a further good run of 8 wins in March / April vs Pontypool, London Welsh, Moseley, Bath, Aberavon, Bristol, Glamorgan Wdrs and Abertillery.

Rhys Morgan and David Waters both passed 500 appearances for Newport. David Waters was awarded the Martin Webber Memorial Trophy for clubman of the year and Damien Griffiths the Boucher Cup for most promising new-comer. Top points scorer was Gary Abraham with 301pts while wings John Thomas (21) and Damion Griffiths (19) led the try scorers. Marc Batten scored his 100th try for the club and joined and elite group of players and Jon Callard passed 500pts in his Newport career and finished on 543pts with 94pts from his 28 games but sadly for Newport he left to join Bath where he would play for England. Glenn George and David Waters made most appearances with 42 each. Top points scorer was Gary Abraham with 301 pts from 36 games (4t, 51c, 60p, 1dg)

Damion Griffiths (wing) was selected for Wales U21 and Wales B and Ian McKim played for Wales Youth. David Waters was in the Wales 7’s squad in Australia. Rhys Morgan played for the Barbarians.