Following the procedure that had been carried out for the first time the previous season, players’ recommendations for captains for 1st XV and United were considered and Wales B hooker Mike Watkins was elected captain for 1983/4.

Early matches were encouraging and on Oct 1st 1983 Newport defeated old rivals Cardiff 32-21 at Rodney Parade with wing Tim Harrison scoring a hat-trick. Victories continued up to Christmas including Gloucester, Llanelli, Ebbw Vale, Maesteg, Glamorgan Wanderers and a draw against the Barbarians. Unfortunately outside half Andy Phillips showing fine form then suffered a serious leg injury as did Wales B fullback Phil Steele. Success continued after Christmas although Newport were eliminated in the Welsh Cup Q/F at Neath 26-11. Although missing an accurate place kicker, Newport – thanks largely to fine forward play – recorded notable victories over Newbridge, Pontypridd, Richmond, Aberavon, Neath, Moseley, London Welsh and Bath.

Club records were set for points (1110) – first time ever that Newport had scored over 1000pts in a season and tries (186). Top points scorer was Andy Phillips with 174 pts from only 22 appearances and top try scorer was scrum half Tony Coombes with 22 – a club record for a scrum half beating Nigel Callard’s 21. 48 players were used and prop John Rawlins (45) led the appearances followed by wing Marc Batten (44) and locks John Widdecombe (43) and David Waters (43). Newly capped Rhys Morgan passed 350 1st XV appearances and David Waters passed 300 appearances. The Boucher Cup was awarded to prop John Rawlins and the Webber Bowl to flanker Mike Nash.

Mike Watkins was selected to lead Wales on his debut vs Scotland. He retained his place and captained Wales vs France, England and the Rest of the World. This was almost by public and media demand. He had earlier captained Wales B vs France B – the first ever win in France. and the team included Newport team mates Marc Batten, Rhys Morgan and David Waters. Rhys Morgan received his full cap vs Scotland at Cardiff Arms Park. Rhys Morgan and David Waters played for the Barbarians.

Four matches were played on a Portugal Tour in May 1984 under Team manager BJ Jones and coaches Tony Faulkner and Roy Duggan and all were won. 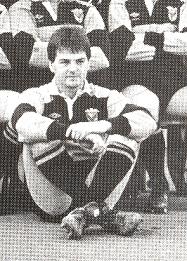