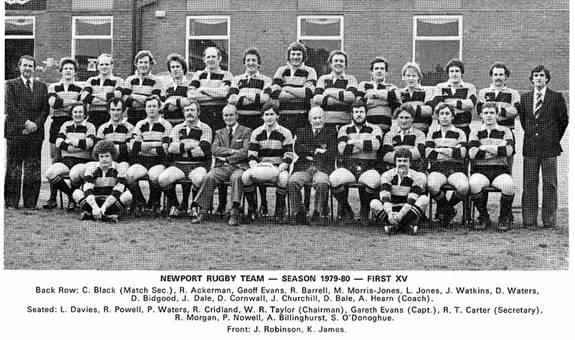 Gareth Evans took over the captaincy in 1979/80 which was to be Newport’s worst ever season in their 105 year history. The writing had been on the wall for some time and over the previous year or so they had lost 3 British Lions- Jeff Squire to Pontypool, Brynmor Williams to Swansea and finally David Burcher to Cardiff after just 2 games this season. Fullback Chris Webber, flanker Bryan Lease had also left for Cardiff. Following a disastrous tour to South Africa in July / August resulting in 5 defeats and 1 draw from 6 matches Newport then proceeded to lose all 8 matches in September. Injuries didn’t help and Newport had to wait until their 13th match for a win – a magnificent victory over the South African Barbarians by 21-15 with tries by outside-half David Rogers and back-row Geoff Evans and 2c,3p from full-back Leighton Davies. Newport did rise to the occasion in the Welsh Cup reaching the semi-final before going down gallantly to Swansea 23-13. They also reached the Welsh National 7’s Final at Pontypool going down to Swansea with Bassaleg Schoolboys Clive Rogers and Stuart Barnes the stars for Newport.
The most exciting new-comer was young wing / centre Robert Ackerman son of former Newport player and chairman Doug. He made his debut in the tough Welsh Cup match at Maesteg in Jan 1980. He acquitted himself well and never looked back, and would play for both Wales and British Lions in the future. He won the Boucher Cup while Roy Cridland and David Waters shared the Webber Bowl.

Top points scorer was Leighton Davies with 174 taking him to 851pts in 164 games for Newport. Wing David Bale scored most tries – 13 in 25 games. 48 players were used during the season in 52 games with scrum half Alun Billinghurst on 45, Leighton Davies on 40 and David Waters on 36.