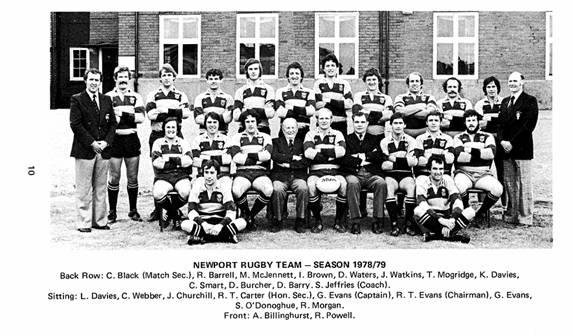 1978/9 saw Geoff Evans elected as captain for the 4th time and John Ryan taking a rest and being replaced by Syd Jeffries as coach and former player Adrian Hearn as assistant. John Ryan eventually went to Cardiff RFC where he helped them win the Welsh Cup for the first time as he had done at Newport. Vice captain Gareth Evans returned from Wales’ tour of Australia with a fractured cheek-bone while a leg injury kept Brynmor Williams out for 3mths. Serious injuries to Chris Webber, Jeff Cranton, Keith Jefferson, Bryan Lease and Phil Williams also contributed to a lack of success during the season. The playing record up until end of Jan 1979 was not too bad : P25 W15 D1 L9 but a further 10 defeats were t follow until the end of the season Geoff Evans captained the side with great dedication and enthusiasm and Colin Smart worked very hard and finally won his coveted English Cap.

Ken Davies was again top try scorer with 16 and in doing so joined the elite band of players who have scored more than 100 tries during their Newport careers. David Barry joined from Cardiff and was top points scorer with 171. Most appearances were made by David Burcher (36) Ken Davies (36), David Barry (35) and Steve O’Donoghue who had joined from Pontypool (35).

Newport toured South Africa in August 1979 under manager RT Evans and coach Sid Jeffrey. Gareth Evans captained the side but the tour was not a success and Newport lost 5 and drew 1 of the 6 matches played. Wing John Churchill played in all 6 matches scoring 4 tries. Chris Webber scored 3t, 3c, 2p, 1dg. Justin Robinson (utility back) made his debut on the tour and was to play many more games or Newport. His brother Julian also joined later.