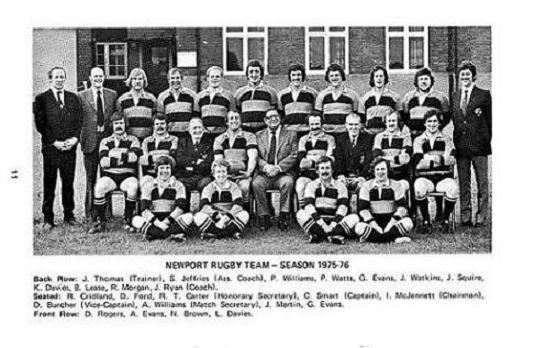 1975/6 will probably be remembered as the season that Newport re-established themselves in the eyes of the rugby world. Pre- season saw a successful tour to USA: P5 W5 F 235 A3 (a penalty goal in last match). Newport lost only 1 match in their first 7- Neath (A) – but then lost 5 of their next 9 including 3 defeats in 10 days (Ebbw Vale, Moseley and Cardiff). However they quickly regained their form and maintained their challenge for the Welsh Unofficial Championship right up to the end of the season only to lose out to Pontypridd who benefited from a much weaker fixture list. Newport lost to Llanelli in the Welsh Cup Q/F at Rodney Parade before a crowd of 11,000 and disappointingly lost to Australia in January by 13-7 in a dull game in front of 25,000 people. Newport’s scores were a try by Burcher and a penalty by Fuller.

Newport welcomed full-back / outside half Leighton Davies who had been released by Cardiff RFC but not only did he eventually become Newport’s all time points scorer he was also to have the last laugh on Cardiff in the Cup Final in 1977.

Englishman Colin Smart led the team with great enthusiasm and played in 47 of the 49 games getting closer to his English Cap and vice captain David Burcher played in all 47 matches. Newport set club records of 971pts and 153 tries. History was also made with Leighton Davies (189), Glyn Bram (102) and Ken Davies (100) all topping 100 pts for the season.42 players were used and leading try scorers were Ken Davies 25 and Gareth Evans 22.

Full-back Glyn Bram joined from Cross Keys but then rejoined the Keys the following season and centre Neil Brown joined from Glamorgan Wanderers. Prop Roy Cridland who would prove to be loyal and always dependable also joined from Machen and wing Jeff Cranton from Pontypool.