John Anthony took over the captaincy from Brian Price and perhaps after the previous outstanding season there would be a bit of an ant-climax. Indeed there was as 17 games were lost but this was not too surprising as those great second rows “Bill and Ben” – Bill Morris and Brian Price decided to retire. The real blow was dealt to Newport RFC once again by the professional rugby league. Newport was always a happy hunting ground and so it proved yet again as Keith Jarrett was tempted and joined Barrow for a fee of £12,000. Len Martin and Jeff Watkins took over in the powerhouse and played well. Laurie Daniel (full-back/ wing) joined from Pontypool as did Wales and British Lion centre Billy Raybould from London Welsh.
In spite of losing so many matches, there were many new records set during the season. Newport scored 720 pts to beat the previous best of 716 and for the first time 2 players passed 100 pts in the season – John Anthony with 162 and Laurie Daniel with 166. Vice-captain John Jeffery set a try scoring record for a forward of 20 beating John Anderson’s 15 set in 1962/3 while wing Peter Rees finally passed Ken Jones’s all time record of 146 tries. He continued for another season to set an all-time record and also became only the 7th player to pass 300 appearances behind Bill Everson, Edwin “Beddoe” Thomas, Brian Jones, George Boots, Roy Burnett and Ian Ford at the top with 481.

Newport recorded some excellent wins – Swansea (H) 35-8, Blackheath (H) 47-11 and their highest ever vs Gloucester (H) 45-9 but on the negative side were 3 defeats to Cardiff and also doubles to Bridgend, London welsh and Newbridge. The highlight of the season however was the magnificent win – their 2nd- against the touring Springboks on Nov 12th 1969. They became the first Welsh team to beat the Springboks since 1912 when Swansea and Newport recorded wins. Newport were the better team with captain John Anthony magnificent at full-back. Half-backs Billy Raybould and Gwilym Treharne controlled the match and the forwards were outstanding particularly prop Barry Llewelyn and 2nd rows Len Martin and Jeff Watkins. The line-out was one and the ball was moved along the three-quarters for wing Allan Skirving to touch down. In the 2nd half John Anthony raced to a maul and grub-kicked through and centre Dai Cornwell was there to touch down for Anthony to convert. Full-back P J Visagie kicked a penalty for the Springboks and then Anthony kicked a 45 yd reply. Visagie kicked a 2nd penalty for a final score of 11-6 to Newport.

42 players compared with only 34 the previous season played and appearances were led by John Anthony (45). Len martin (40) and Gary Sutton (39). Prop Jim McCreedy made his debut as did wing / centre Roger Francis. Leading try scorers were John Jeffrey and Laurie Daniel with 20 with Alan Skirving on 13.

Barry Llewelyn who left to join Llanelli at the end of the season played in all 5 Wales internationals (5 Nations + South Africa) and Billy Raybould (3), Vic Perrins (2) and Laurie Daniel (1) also played for Wales during the season. Del Haines played for Wales B vs France B in Paris. 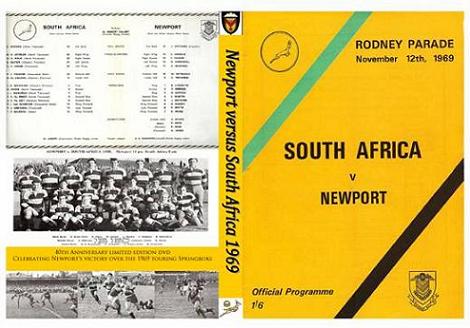