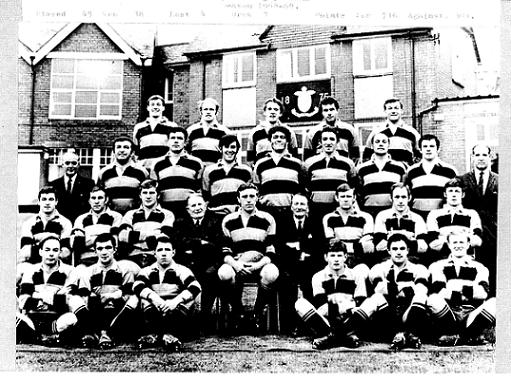 This season under captain Brian Price was quite exceptional for many reasons. Newport RFC so often innovators in Welsh rugby reacted to the new laws by first appointing two coaches Brian Jones and Ian McJennett and decided to go with a “squad” system of a basic 27 players. Newport rarely fielded the same team two matches running and at times there could be up to 10 changes from one match to another without any adverse effect on the team performance.. The coach’s realized that the demands on players would be more excessive than in previous years and they introduced an intensive scheme of training. The end result was one of the most successful seasons in the club’s illustrious history but it wasn’t only results that were impressive it was also their approach to the game making Newport easily the best side in Wales as they won the unofficial Welsh Championship at a canter and in some style. The squad system was an undoubted success and only 34 players were used during the season
38 wins were recorded which was the most ever in one season and the previous points record of 71 in 1964/5 was equaled. Keith Jarrett beat Ray Cheney’s season’s points record of 224 in 41 games with 250 in only 28 games. He also set an individual points record of 30 (2t, 2p, 9c) vs Penarth n the first game of the season at Rodney Parade. Sadly one record eluded them – 4 wins vs Cardiff. They won the first 3 but drew the last in front of a packed crowd at Cardiff Arms Park. They were desperately unlucky and only Welsh scrum-half Gareth Edwards saved Cardiff. The reaction of the players of both sides at the end on the match showed just how important the result was.

Tragedy struck the rugby World when last season’s captain Martin Webber was killed in a road accident involving his sports car near Banbury. There is little doubt that Martin was destined for great things in rugby – a truly tragic loss.

Brian Price showed that he was one of Newport’s best ever captains. He led he side magnificently and only 4 games were lost. The third game was lost at home to Bristol 13-21 but injuries played a major part with Newport reduced to 14 men. The next loss was an inexplicable one at Old Deer Park on Nov 23rd 1968 by an incredible 5-31. This was duly avenged on Easter Monday at Rodney Parade the day after they had lost at home to Newbridge. The following day they lost at home to the Barbarians – the only other defeat. During the season there were many impressive wins – 3 against Cardiff, Penarth (H) 54-11, Blackheath (A) 44-14, Gloucester (H) 29-0, Pontypool (H) 23-3, Wasps (H) 28-3, Penarth (A) 50-6, Leicester (H) 18-0, Harlequins (A) 29-0, Wasps (A) 22-11, Neath (A) 24-6, Plymouth A) 32-6 and St Lukes College (H) 26-13. There were doubles over Penarth, Pontypool, Neath, Cross Keys, Swansea, Cardiff, Blackheath, Llanelli, Gloucester, Wasps and Aberavon. No matches were played in February due to frost and snow.

Stuart Watkins led he try scorers with 27 – he had scored 115 in his 162 games for the club but left at the end of the season to join arch rivals Cardiff. Keith Jarrett, Allan Skirving and Peter Rees each scored 13 tries. Most appearances were made by Keith Poole (38) and Del Haines (35) and they jointly received the Martin Webber Memorial Bowl for Clubman of the Year. This was presented by Martin’s father. Barry Llewelyn, a great prop from Llanelli who was in college at Caerleon won the Boucher Cup for most promising newcomer.

Brian Price captained Wales 3 times in their Triple Crown and Championship winning side missing the last match vs England with a knee injury. Keith Jarrett and Stuart Watkins played in all four of the 5 Nations matches and Price, Watkins, Jarrett, Skirving and Llewelyn toured Australia / Fiji with the Wales Squad.