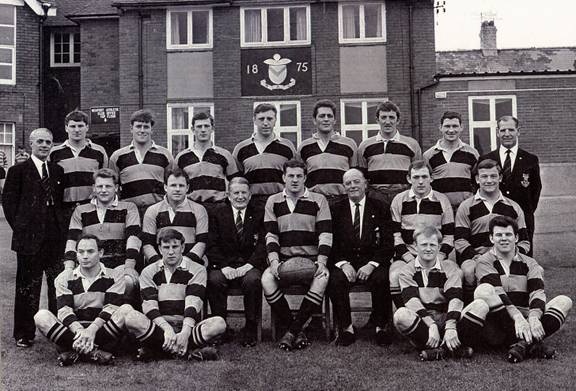 David Watkins continued with his 4th term as captain and in their first 11 matches only suffered 2 defeats – both away to Newbridge and Blackheath. They had beaten Penarth, Bristol, Pontypool, Neath, Llanelli Cross Keys, Cardiff and Abertillery and had drawn against Swansea but after the mid-week win at Abertillery there was an announcement which shocked not only Newport RFC but the world of rugby. Not for the first time were Newport to lose a player to the professional ranks of rugby league – this time it would be their captain David Watkins who would leave them for Salford RL for a record signing on fee of £15,000. He would eventually link up once again with former Newport scrum-half Bob Prosser who would transfer from St Helens. Many thought that Watkins took this step as he was not happy with his treatment from the WRU.
Newport welcomed a 19yr old from Cardiff College and who had played a few games for Ebbw Vale. He made his debut at Gloucester but later he missed many games with an appendix operation. Bob Phillips had been elected as Oxford University captain and was not available but Eddie Mogford and David Rogers played a number of games. John Anthony won his Blue at Cambridge University. Notable newcomers were 2nd row Jeff Watkins (Cwmbran) who would play 381 games up to 1981 and serve as Chairman, Wales international centre D Brian Davies (Swansea), prop Trevor Davies, wing Brian Coles (Bridgend), scrum-half Brian Mills (Cross Keys) and Wales Youth captain Allan “Archie” Evans who would play up until 1979. He won the Arthur Boucher Cup for most promising newcomer.

To add to Newport’s problems vice captain Martin Webber had to recover from a broken collar bone. He returned as captain with Peter Rees vice-captain and Brian Price only played 20 games due to injury and appendicitis. Not surprisingly it was a difficult season with 16 defeats – 2 resounding ones to Cardiff 3-19 and 3-26. It was not all bad though and there was a splendid 26-11 win over the Barbarians at Easter. Newport played 3 matches in France vs Paris University (D), Gueret (L) and La Voulte (L). Martin Webber led the team well and a number of players showed up well including Paul Evans who showed great promise, centre Keith Jarrett who scored 100 pts after only 13 games, wings Stuart Watkins (20t) and Peter Rees (28t) who beat John Lane’s / Ken Jones’ record of 44t in 1954/5.

Peter Rees played in all 51 official matches – the first Newport player to play in 50 or more games in a season – and was also leading try scorer with 28. Stuart Watkins was next with 20 while Keith Jarrett scored 195pts from his 34 games. Vic Perrins (44), Jeff Watkins (44), Keith Poole (43) and Del Haines (41) all made over 40 appearances during the season and were the mainstays of the team as they would be for some years to come.

Stuart Watkins, Keith Jarrett and John Jeffery all played for Wales and Jeffrey won a place on the Wales tour to Argentine. Jarrett who developed well as a centre replaced the injured Lloyd of Harlequins on the British Lions tour of South Africa. 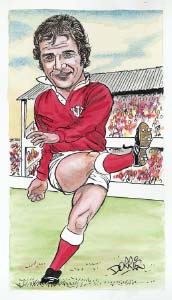