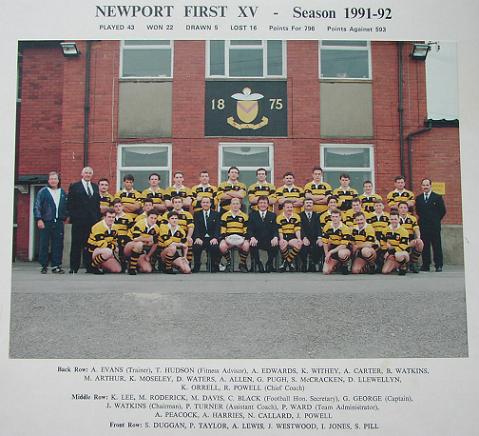 Fullback / wing Alun Harries scored 200 pts from 33 apps including 16 tries (5 in league), Paul Turner scored 74pts (49 in league) from only 19 apps while centre Keith Orrell scored 12t and made most appearances with 34. Newport however only finished 8th out of 10 in the Premier Division with a record of W7 D2 L9.

Scrum half Nigel Callard scored his 100th try and ended the season on 105 tries from a total of 212 apps for Newport. He would actually play a further 6 games for Newport again in 1995/6 & 1996/7. Long serving forward David Waters finished the season on 631 apps and Glen George on 275 with Paul Turner on 992pts in 124 matches. In fact Paul had scored 1145pts from 133 apps if tour matches were also included and was the first Newport player to pass 1,000 pts. He also passed fullback Norman Morgan’s 951pt total from 210 apps. This was not the last time that Paul would appear at Rodney Parade as he would return as Director of Rugby of Newport Gwent Dragons when regional rugby was set up many years later.

Prop Mark Davis and back Jon Westwood played for Wales U21 vs Scotland U21 – Davis had toured Australia with Wales and won his Welsh Cap vs Australia in June 1991. He was also selected for Wales Students Squad to tour Italy in July 1992 in World Cup. Lock Kevin Moseley won a further 3 Welsh caps on World Cup games vs Western Samoa, Argentine and Australia.
and centre Roger Bidgood finally won his first Welsh cap vs Scotland. Bidgood was also named as one of the two best centres in the Heineken Premier League All Star Team.