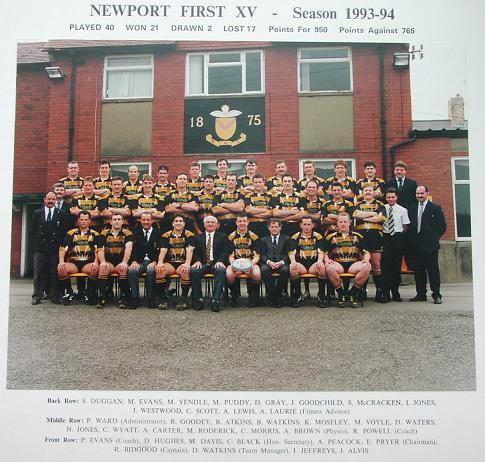 Newport welcomed full-back Matthew Evans and brother Peter – sons of Paul, the former Newport player, utility back Duncan Hughes (Llanelli), wing Martyn Llewellyn, Mold born scrum-half Colin Ellis, back rows Ben Atkins (Abertillery) and Robin Ostler, prop James Alvis (Cardiff Inst) and later in the season their biggest signing for quite some time Canada outside half Gareth Rees. Promising back-row / lock Chris Wyatt – a future Welsh international also made his debut. Newport were also fortunate to have the services of Wales a players Richard Goodey and Neil Jones from Pontypool. Goodey – a former Pontypool captain was to become one of Newport’s best and most popular captains in the near future. Back-rows Dai Gray (Pontypool Utd) and Mark Workman (Machen) made the first of what were to be many appearances for Newport RFC with Gary returning in a coaching role.

It was not to be a good season and Newport finished 8th in the league only managing 38 tries in the 22 matches played. They suffered a huge shock when they went out of the Welsh Cup at Ystradgynlais (9-10) with former Newport outside-half Mike Lewis playing his part. There were few highlights but the main ones were wins over Llanelli and the Barbarians and a stirring performance against Swansea only to be robbed by a winning try by Swansea from a “forward” pass. To offset this were humiliating defeats at Stradey Park, St Helens and Cardiff Arms Park. Things may have been different if Canadian star outside-half Gareth Rees had been able to join Newport earlier in the season.

Utility back David Rees scored 199 pts from 24 games before transferring to Cross Keys while Gareth Rees scored 112pts in just 8 games. For many Gareth Rees, who had kicked Canada to victory against Wales in 1993, was the best place kicker ever to play for Newport. Chris Wyatt and David Llewellyn each scored 10t in 22 games.

Appearances were led by back Mark Yendle 31, lock Neil Jones 30, back Duncan Hughes 28 and forward David Waters 16. Amazingly Muddy Waters was still playing at the top level as he neared his 39th birthday. He had by the end of the season played 682 1st XV games and would play again the following season !

Duncan Hughes and Chris Wyatt played for the successful Wales U21 team vs Scotland, Ireland and France.