There were a number of new faces in the 1st XV including 6 from Cardiff – full-back Simon Davies, wings Robert Saddler and Owain Thomas, wing / centre Adam Palfrey, scrum-half Jason Hewlett (Cardiff). Other newcomers were wing Andy Arentson (Cardiff Quins), backs Jake Lowrey, Mark Cox (Newbridge) and David Smith (Glamorgan Wdrs), Wales Youth and future full international lock Ian Gough, future international hooker Paul Young (Llanelli), flanker Chris Brown (Cardiff Inst) and back-row Richard Parks but the player who will remain in people’s memory for many years to come was Canadian international front row Rod Snow who had been recommend by fellow Canadian Gareth Rees. Snowy would be around for 10yrs and become one of the most popular players ever to don the famous Black & Amber shirt.1995/6 was a season of mixed fortunes. In the league there were excellent wins against Cardiff (A), Llanelli and Bridgend but Newport could only finish 8th out of 12 in the Premier League. They scored 43 tries which was an improvement on recent seasons. They reached the Welsh Cup S/F for the first time in 10yrs and hopes were high against Neath at Cardiff as wing Richard Rees scored direct from the KO but Newport were cruelly robbed in the last few minutes by a penalty goal to go down 22-24.

During the season coach Paul Evans and fitness adviser Alex Laurie were dismissed due to a succession of poor results and a poor standard of play on Dec 12th 1995. Ex-Welsh international (Llanelli / Pontypridd) Tommy David was appointed as Director of Rugby, former Newport and Wales flanker Alun Carter as performance advisor while Steve Jones continued as forwards coach. Later Stan Liptrot was appointed backs coach on April 11th 1996.

David Waters made his 702nd and final appearance in the last match of the season at Stradey Park, Llanelli and in the same match a star second row of the future, Ian Gough, made his debut as a replacement and so was on the field for the last 10 mins with the legendary David “Muddy” Waters. What a great career had with Newport and one wonders if anyone will ever get anywhere near his magnificent record let alone break it. Muddy had already played many many matches for Newport United and wasn’t finished yet as he would play for Merthyr RFC in the lower leagues for a couple of seasons. Muddy holds the record as Newport RFC’s oldest Premier League player – 40yrs 11mths and also the oldest try scorer at age 40yrs 10mths.
Canadian international Gareth Rees broke Paul Turner’s points record of 368 with 398 pts in 30 games (282 in league), although Turner had scored 442 pts if Cyprus Tour points of 74 were taken into account.

Top appearances were made by outside half Gareth Rees 30, centre Duncan Hughes 29, back-row Mark Workman 27, while David Waters made 10 apps to take him to a record 702. Wing Richard Rees scored 12 tries including a hat-trick against Tumble in the Welsh Cup.

Second row Mike Voyle won his first Welsh cap as a replacement in Australia in June 1996. He also played for Wales A with back row Mark Workman while centres Duncan Hughes and Adam Palfrey played for Welsh Students. Newport’s Youth team lost by a single point in the cup final against Swansea and Ian Gough played for Wales Youth, David Bishop for Scotland Youth and Martin Davies for Wales U18. Gareth Rees and Rod Snow played for Canada. 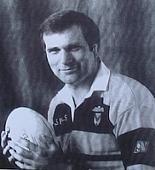