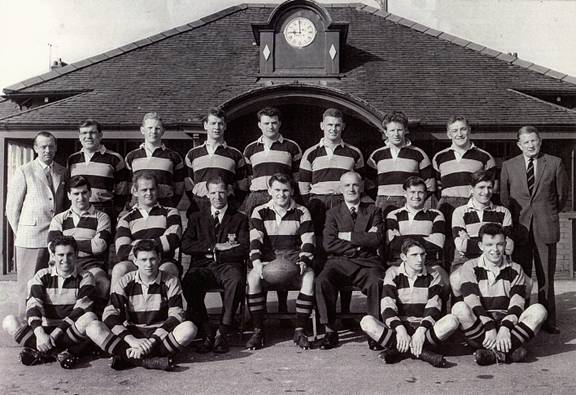 Many players had retired but new captain Brian Jones helped the team to score over 500pts for the 6th time since the war in what was again a very successful season. Malcolm Thomas ended his great rugby career when he retired on returning from the British Lions tour and Bryn Meredith missed many of the early games, not playing until Nov 21st 1959 vs Cambridge Uni. Newport made a great start winning their first 11 matches until Nov 28th 1959 when they lost 5-6 (1g to 1p, 1dg) at Old Deer Park to London Welsh. The success of the Newport players was recognized as 6 players won caps during the season. Outstanding backs were Norman Morgan who set a new club record of 167 pts (1t, 37c, 29p, 1 dg) – he also scored 14 pts for Wales, Brian Jones, who stood in at out-side half when Gethin Evans was dropped due to his negative style of play, won caps for Wales at centre and Clive Lewis who scored 18 tries from 34 appearances. Promising fast wing / centre was Richie Wills who scored 13 tries from 29 games was the Boucher Cup winner. Other backs of great promise were John Anderson and Gordon Britton while Jack Hurrell also played his part in the centre. Many forwards stood out – props Fred Williams (ex-Bristol) and Des Greenslade, Graham Bevan deputizing for Bryn Meredith and the truly outstanding back row of Cresswell, Davidge and Whitson who were easily the best in Wales and were picked en-bloc for Wales vs Scotland and Ireland.

Cardiff were again beaten 3 times but that elusive 4th victory was not to be with 3rd match at Cardiff being drawn 6-6. Doubles were recorded over Blackheath, Bristol, Cardiff, Gloucester, Llanelly, Neath and Penarth while Newport were one of the few teams to beat Welsh Champions Ebbw Vale – winning 8-5 at Rodney Parade – and finished as runners-up.. However they lost their 1 year old ground record to the Barbarians on April 19th 1960 by the narrow margin of 9-11.

Ian Ford (40) missed only 1 game and Fred Williams (39) missed just 2 and next was captain Brian Jones with 35 appearances. This put Ian Ford in sight of 300 appearances which he was to achieve the following season. Clive Lewis was leading try and Norman Morgan leading points scorers. Brian Price, a future Newport and Wales captain made his debut and played 4 games.

Interestingly wing forward John Ryan made his debut on the end of season Devon tour. John was to become one of Newport’s most successful coaches in the 1970’s.For the first time ever, Newport did not reach the Snelling 7’s final losing 5-20 to Penarth in the S/F.