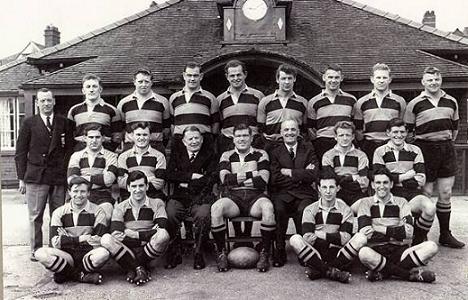 Bryn Meredith was captain for what was to be a season of records. Roy Burnett played his 366th game and so beat the long standing record (1921/2) of George Boots. He finally ended his great career on 373 appearances – one of the club’s great players and great servants. A new outside half appeared – Gethin Evans, a teacher, who had played some games for Newbridge and had deposed Malcolm Thomas, dropped 11 goals from his 27 appearances to equal Arthur Gould’s record of 1884/5. Another drop goal record was set when both Newport half-backs each dropped goals in 3 different matches – Gethin Evans / Billy Watkins at Cardiff and vs Bristol and Gethin Evans / Brian Scrivens at Plymouth. Newport beat Rosslyn Park 55-3 at Rodney Parade and all the backs scored tries – N Morgan, C Lewis, J Roblin, BJ Jones, Roy Burnett, Gethin Evans and Brian Scrivens – 12 in total.

Malcolm Thomas had a poor start to the season and after Nov 12th 1958 vs Cambridge University, he did not play regularly but in the New Year he played so well that he won a further 2 Welsh caps – one at centre and one at outside-half with his club partner Billy Watkins. Young wing Clive Lewis won the Boucher Award for most promising newcomer and had a great season with 28 tries from 39 games and was leading try scorer by some way with promising centre Brian Jones getting 12 from 40 games. Jack Hurrell fulfilled his promise ands was capped by Wales as was scrum-half Billy Watkins who had one of the best and longest passes in the game. Norman Morgan (130pts) scored over 100 pts for the 4tth successive season and was Welsh reserve to Terry Davies. That great servant John Phillips came out of retirement to help when Bryn Meredith was missing due to illness while young hooker Graham Bevan continued to show great promise and Phillips refused to stand in his way. A special mention must be made about John Redvers Phillips. He had given fantastic service to Newport and must rank as one of the finest hookers never to win a cap. At times he was a better hooker than the great Bryn Meredith himself. He had been Welsh reserve hooker / prop for an incredible 20 times and once actually had the Welsh shirt on before having to hand it back 10 mins before kick off when the Welsh prop finally got through the traffic to get to the ground ! Colin Cobley took over from Mervyn Hinnem at prop and there was the ever dependable Des Greenslade on the other side of the scrum. Ian Ford and John Herrera as always could be relied on to do their jobs in the second row while the back-row of Cresswell, Davidge and Whitson was the best in club rugby and fast becoming one of the best around.

There was one of the strangest ever merry- go-rounds in Welsh rugby. In 1958 Colin Evans lost his place to Brian Scrivens so he went to Pontypool where he displaced Billy Watkins who then joined Newport and eventually displace Brian Scrivens. Watkins was capped by Wales and then lost his place to Evans who was capped and then turned professional. Eventually Scrivens would displace Watkins at Newport and turn professional while on the verge of a Welsh cap.
Newport won the first 3 matches against Cardiff and were fancied to finally win all 4 matches but Cardiff forced a 0-0 draw in the mud at Cardiff Arms Park. Newport, captained by Bryn Meredith, once again won the Snelling Welsh 7’s at Cardiff beating Cross Keys, Glamorgan Wdrs, Ebbw Vale and Pontypool in the final to make it 4 wins and 2 R/U in the 6 times held tournament.
Most appearances were made by B Cresswell (41), BJ Jones (40), C Lewis (39), C Cobley (370, D Greenslde (36) and I Ford (36). Captain Bryn Meredith missed many games and only played 16 games in total for Newport.

Wales caps were won by M Thomas (2), B Meredith (4), Ian Ford (2), W Watkins and G Davidge and Byn Meredith an Malcolm Thomas were selected for the British Lions to NZ / Australia. It was both players 2nd Lions tour.