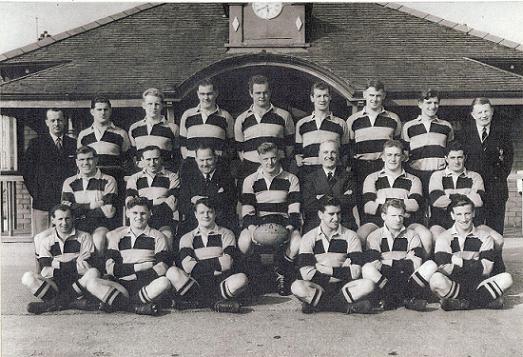 Leighton Jenkins took over the captaincy for season 1957/8 and what a start to the season there was ! Newport lost their first 2 matches and it looked on the cards that this would be the worst season since before the war. The first match was Penarth at home in Rodney parade as it had been since 1946/7. Penarth had not beaten Newport since Dec 1933 when they won at Penarth 12-5. They last won at Rodney Parade in Nov 1932 when they win 9-0 -0 they also competed the double that season winning 4-0 at Penarth. Newport were without internationals Ken Jones, Bryn Meredith and Geoff Whitson but were still bale to field a side containing no fewer than 9 of the players were then Welsh internationals or would become so in the future years – Roy Burnett, Leighton Jenkins and Norman Morgan, Jack Hurrell, Colin Evans, Des Greenslade, Ian Ford, Glynn Davidge and Brian Cresswell. Welsh trialist Jack Hurrell had moved from Cross keys and was making his debut at outside half, centre Ray Knott had transfered from Abertillery and there were promising Newcomers Brian Were (wing) and David Walkey (wing forward). Newport were 9-3 up at HT with tries from Cresswell and Brian Were and a penalty goal from full back Norman Morgan. In a sensational 2nd half Newport made mistake after mistake and Bernard “Slogger” Templeman took control of the game and dropped 3 goals which with wing H Griffiths’s try gave Penarth 12-9 victory. Changes were made for the 2nd match at Rodney Parade against the touring Ranji WalkerXV. Internationals Malcolm Thomas, Harry Morgan, Bryn Meredith and Geoff Whitson were back but Newport still lost 0-3. This was the first time in Newport’s history that they had lost the two opening games. On Sept 14th strong English side Bristol visited but Newport ran out winners 13-6. They then turned the season around and in the end 1957/8 turned out to be a notable season in the club’s history. Cardiff only managed to beat Newport once in the 4 matches played – 0-3 at Rodney Parade and light blues Cambridge Universities only defeat of the season was at the hands of Newport – 8-6 at Rodney Parade. Newport beat the seasonal visitors Watsonians on Boxing Day at Newport and then only lost 1 game of the next 22 played. They did however lose the last 2 matches of the season to Neath (A) and Llanelly (A).

The highlight of the season without doubt came on the afternoon of Nov 23rd 1957 at Rodney Parade. Newport had just taken Cambridge University’s unbeaten record but few would have predicted the outcome of the match against the touring Wallabies. Malcolm Thomas was a magnificent general at out-side half, full-back Norman Morgan who had been having a difficult season came through with honours with his general play and a couple of truly outstanding flying tackles and he also had a magnificent 40 yd drop goal, Roy Burnett not only outplayed his opposite number A R Morton, he also had some beautiful runs and Brian Scrivens although injured early on certainly played his part at scrum-half. And then of course there were the magnificent forwards – the tremendous front row of John Phillips hooking with Bryn Meredith and Des Greenslade propping, Ian Ford dominating the line-out as well as making some great runs in the loose and well supported by Glynn Davidge, and a tremendous back row of Brian Cresswell, Leighton Jenkins and Geoff Whitson who tackled anything that moved. Ford started the move with a run before centre Jack Hurrell crossed for a try. In the 2nd half, Burnett started the move and then Thomas drew the defence before giving the ball to Leighton Jenkins to score and Norman Morgan to convert and then finally there was Morgan’s great 40 yd drop goal from a poor Terry Curley clearance at full-back. It was the biggest defeat for Australia by a British Team and the only time during the tour that they failed to score. It was another page in the club’s great history.

Malcolm Thomas took over the problem out-ide half position with great success and also the captaincy when Jenkins was ill. Burnett played his 300th game of his Newport career – only the 5th player to achieve this – and the great Ken Jones finally retired but by the end of the season there were players for the future in Norman Morgan, Jack Hurrell, Brian Jones, Brian Scrivens, who had taken over the scrum-half position from his rival Colin Evans, Des Greenslade, Glynn Davidge and Brian Cresswell. All – as well as Ian Ford – were to win caps in the future except Brian Scrivens who eventually turned professional when on the verge of a cap. Scrum-half Billy Watkins (ex-Pontypool) made his debut and only played 1 game but he was to figure in a future fascinating merry-go-round with Colin Evans and Brian Scrivens before both he and Evans were eventually capped by Wales.

Newport played their first official floodlight match on Oct 9th 1957 vs International XV.
At the end of the season 20,000 saw Newport reach their 5th consecutive Snelling 7’s final at Cardiff Arms Park beating Maesteg, Cardiff and Neath on the way but this time they were pipped in the final 5-10 by Ebbw Vale. Newport’s 7’s record stood at P20 W18 L2 F195 A75. 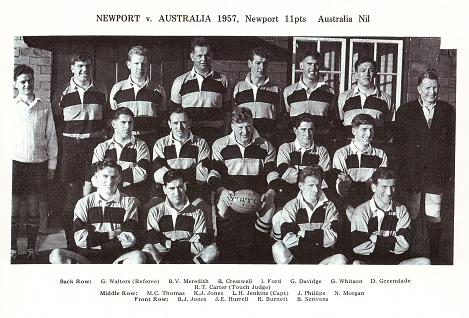