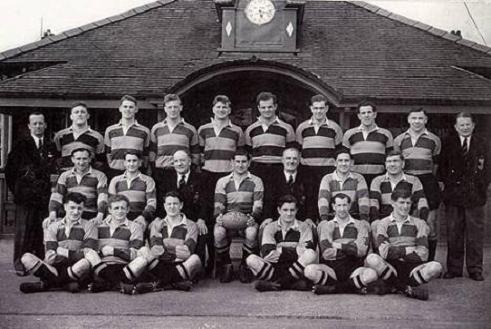 Malcolm Thomas as the elected captain of Newport RFC for the second season running would as all previous captains been optimistic of a good season but he would not have guessed that he would captain the team to the Unofficial Welsh Championship. Newport welcomed a number of new players who were to become Welsh internationals in the future – prop Des Greenslade from Newbridge, scrum-half Colin Evans from Blaenavon and full-back Norman Morgan who had just left the Army. Colin Evans and Norman Morgan had to fill the shoes of Onllwyn Brace and Garfield Owen who were in College and they did the job perfectly with Norman Morgan setting a new club points record of 165 beating Ben Edwards record of 159 set in 1950/1 and Colin Evans putting in many impressive performances, so much so that he became reserve to Brace himself for Wales. Roy Burnett missed many matches and only played 22 in the season but it was the forwards who laid the foundation for the success. John Phillips who could hook or prop and prop Des Greenslade were valuable members of the team – some even said that Phillips was a better hooker than Meredith himself who only played 15 games in the season. John Herrera joined Ian Ford in the 2nd row as Hancock had turned professional. The back row of Ackerman, Jenkins and Whitson completed an excellent pack that was not only formidably strong but also very mobile. Of the backs, Norman Morgan (35), Colin Evans (32), Malcolm Thomas (31) and Harry Morgan (29) made the most appearances while Des Greenslade (39), Doug Ackerman (31), John Herrera ((31), Ian Ford (29) and John Phillips (29) were the most used forwards. Cardiff were beaten 3 times but they and the touring South African Universities (Capetown & Stellenbosch) were the only teams to win at Rodney Parade. The Universities won 6-3 (2 tries to 1) but Newport were unable to field their strongest team with Garfield Owen, Onllwyn Brace and Bryn Meredith all not available due to College commitments. Interestingly Harry Morgan was preferred to Roy Burnett at fly half. Malcolm Thomas scored Newport’s try and Norman Morgan hit an upright with a penalty attempt. It was Newport’s first defeat after 17 successive victories.

Newport under Malcolm Thomas won the Welsh (Snelling) 7’s. Newport had won the 7’s twice and been runners-up once in the 3 times since it was first held in 1954. They beat Ebbw Vale, Pontypool, Cardiff and in the final Penarth. Newport’s seven was M Thomas (capt), K Jones, R Burnett, C Evans, J Phillips, L Jenkins and G Whitson.

Wales recognised the performances of the Newport players in their 4 international matches by awarding 29 caps to Garfield Owen (4), Ken Jones (4), Malcolm Thomas (4), Harry Morgan (4), Onllwyn Brace (4), Bryn Meredith (4), Leighton Jenkins (4) and Geoff Whitson (1). Ken Jones played his 43rd time for Wales and became the most capped ever player in the four Home Countries beating Dr George Stephenson of Ireland.
Malcolm Thomas captained Monmouthshire who had a number of Newport players in their side during the season to the Welsh Counties championship.