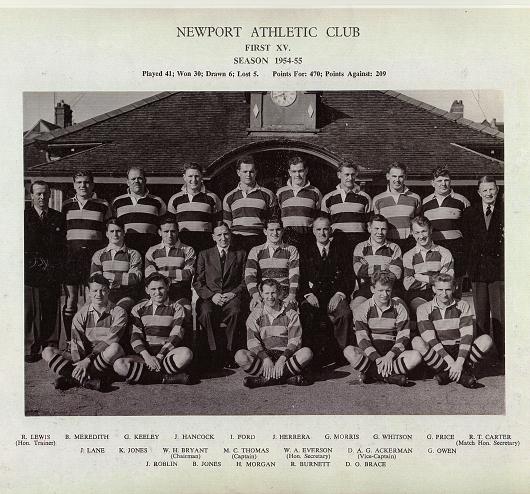 The chosen club captain Malcolm Thomas broke his leg in a club trial and the always dependable Doug Ackerman took over the role until Dec 18th 1954 when Thomas returned at the Harlequins. However Thomas fully supported the team from the sidelines while Ackerman did his duty on the field. When Thomas returned he fully recaptured his old form and the rest seemed to have done him much good. He returned having seen his team lose just 4 games of the 18 played so far. These were all away defeats – to Neath, Lansdowne, Llanelly and Cardiff.

Half-backs Brace and Burnett at times showed true class with Burnett a somewhat steadier and mature player than in his youth. They formed the best club partnership in Welsh rugby and helped to turn things around from the previous season and as a consequence the crowds started to gradually return. A new club record of 44 tries by wings Ken Jones (21) and John Lane (23) was set beating the previous record of 42 by Arthur Holland (21) and Reg Plummer (21) in 1920/1. Lane continued his prolific scoring and by the end of the season he had scored 125 tries in his 175 games for Newport. Ken Jones had his best season to date for Newport with 21 tries from his 28 games. The centre play showed a marked improvement thanks in no small measure to Harry Morgan a Cambridge Blue. Young centres Brian Jones and John Roblin were helped to learn their trade by astute play by half-backs Burnett and Brace. Thanks to the improved centre play, wings Jones and Lane were able to set their record.

Only 6 games were lost but Newport’s poor run against |Cardiff continued with only 1 win and 1 draw from the 4 matches. Only Cardiff (2). Neath, Lansdowne, Llanelly and Gloucester lowered Newport’s colours with only Cardiff winning at Rodney Parade. John Lane (40) followed by Doug Ackerman (39), Roy Burnett (36), Onllwyn Brace (34) and Gordon Keeley (33) played the most games. Garfield Owen was the most successful place kicker with 17c and 10p.

Garfield Owen was capped by Wales having to miss the first two matches due to a knee injury. Ken Jones (4), Bryn Meredith (4) and wing Trevor Brewer (2) – who played for Newport 1948-1950 also played for Wales while Bryn Meredith won the ultimate honour of being selected for the British Lions to South Africa. 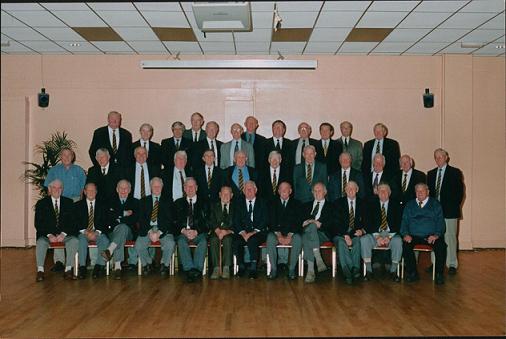