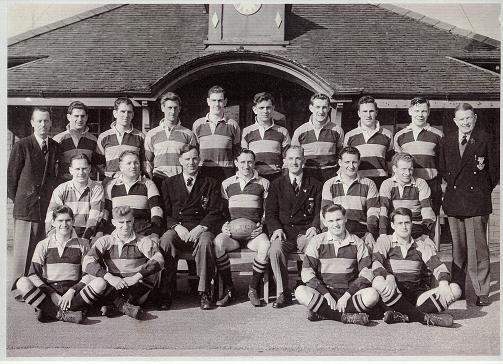 Ken Jones was selected as captain for the second time in his career. He had been captain of the highly successful 1950/1 season but had only played 18 of the 40 games that season. It was to prove to be a difficult season but Ken himself set a record when he won his 35th consecutive Welsh cap beating the record of 33 by WJ Bancroft and equaling the record of a total of 35 by Dicky Owen.

The season was a disappointment as Newport suffered from inconsistency and more than a fair share of bad luck. However the future looked bright with Garfield Owen (full-back), Brian (BJ) Jones (centre) and Onllwyn Brace (scrum-half) all made their debuts. All would eventually play for Wales as of course hooker Bryn Meredith – a future British Lion and arguably one of the game’s greatest ever hookers. Billy Williams had semi-retired and returned to his former club Talywain after great service. He said at the time that he was proud to play for Newport RFC whom he considered to be the greatest club in the World. Onllwyn Brace, at Cardiff University at the time, wanted to leave Aberavon as they wanted him to play outside half to Cliff Ashton at scrum-half. They would both play for Wales – Ashton actually made 1 appearance for Newport in 1962/3- in the positions the other way around. The club and supporters were excited at the prospect of Brace playing with Burnett but unfortunately Burnett suffered during the season from illness, injuries and some loss of form. Interestingly Brace would eventually play for Oxford University partnering England cricketer Mike Smith.

Newport were looking for a full-back and centre partner for Malcolm Thomas. Malcolm Lewis had played at full-back but had to retire with a broken leg while Malcolm Thomas was having to fill in at outs0de-half in Burnett’s absence. Late in the season – on Apr 20th 1954, Garfield Owen, a youngster from Llanharan, played against the Barbarians. He would solve Newport’s full-back problem but only for a short while as he was to turn professional with Halifax RL in 1957. His appearances for Newport were also to be limited due to College commitments. Young 18yr old centre BJ Jones was given his chance and played in 19 games scoring 4 tries and doing some useful place kicking also.

Peter Davies, a traveling Welsh reserve so many times, had gone North with Leigh RL and Leighton Jenkins and Bryn Meredith missed many games due to College commitments but Lyn Davies and Harold Davies were still there in a relatively new look pack. Wing forward Dick Sheppard scored 14 tries from his 29 appearances – to equal the forward record of Wallace Watts who had scored 14, also from 29 games in 1891/2. Back-rows Doug Ackerman and Gordon Morris were now starting to play their best rugby for the club. 2nd row John Herrera, nephew of international and former Newport and Cross Keys player Ron, made his debut. He was to give great service to Newport forming a great 2nd row partnership with Ian Ford in later years. Back-row Vic Leadbetter, who had won 2 caps for England the previous season while with Edinburgh Wdrs made his debut.

Newport played magnificently against the All Blacks only to lose by goal kicks 6-11. Lane scored Newport’s try and 18yr old Brian Jones kicked a long distance penalty. Onwllyn Brace was magnificent as he covered time and time again for the crippled Roy Burnett who was carrying an injury. The score could have been so much closer had Malcolm Thomas and Peter Smith kicked their goals. Newport could only manage 1 draw in their 4 matches against Cardiff.

Ken Jones played in all 5 Welsh matches including the 13-8 win against New Zealand when he scored a try and he captained the team vs Scotland. 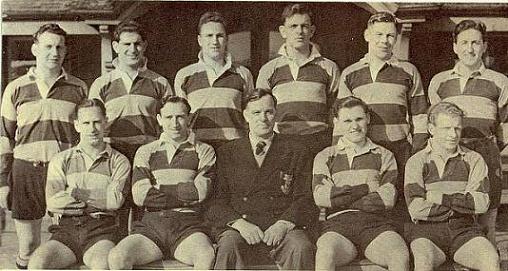