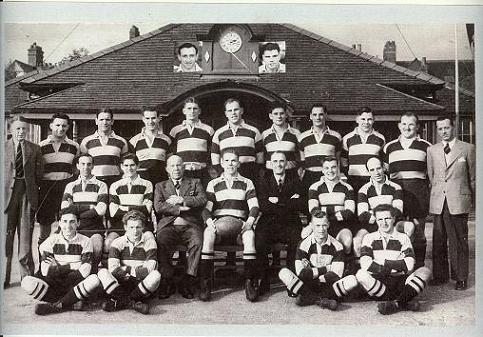 Hedley Rowland was taken seriously ill and LET Jones took over the captaincy and his task was made all the more difficult due to a number of injuries to players and in the end 56 different players were used. A poor start meant that Newport lost 3 of their first 5 games and by Dec 17th 1949 when they lost to Swansea at St Helens, the record stood at P17 W7 D3 L7 but then came a magnificent turnaround with the result that Newport only lost 1 further match in the 25 played. Sadly this defeat was at home to Cardiff on March 4th 1950 by 8-11. Newport avenged this defeat on April 1st at Rodney Parade and it has to be said that these two Welsh teams were probably playing the most attractive rugby in the country. Praise must go to Let Jones who had the full support of his players and of course to the mercurial Roy Burnett. He had only played the first game of the season and was then ill until he returned on Boxing Day vs Watsonians Roy played 24 games in the season and was on the losing side only once. Other backs to impress were full-back Gerry Gibbons, ex-Cross Keys captain centre Bryn Williams and Bobby Owen who sadly was injured and missed the latter part of the season. For all the good three-quarter play wings Ken Jones, Deryck Jones and Trevor Brewer did not score that many tries. Newport again lost a valuable player in scrum-half Hadyn Thomas who failed to win a Welsh cap and went North to Workington RL in March 1950. Luckily they had Billy Williams the Talywain captain as a replacement. He would play for Newport until 1953 and play in two Wales Grand Slam teams.

At forward Newport missed the great Bunner Travers who had been forced to retire due to injury but Lyn Davies was to prove to be a fine replacement. Tom Sterry and Geoff Hirst formed a great front row and behind them Newport had Ben Edwards, LET Jones, Peter Davies, Doug Dando, Bob Evans and Doug Ackerman who made his debut in Dec 1949. Doug had won 7 Welsh Schoolboy caps and was to play 230 games for Newport. He later served Newport RFC committee admirably but never won the Welsh Cap that many felt he deserved.

2nd row LET Jones led the appearances on 42 with flanker HJ Tovey on 35. Bryn Williams led the try scorers on 10 with Deryck Jones, HJ Tovey and Hedley Rowland on 8. Wing John Lane scored 5 tries in 11 games and he was to become one of Newport’s most prolific try scorers and become one of the elite players to score over 100 tries in their Newport careers. Peter Davies did his share of place kicking but Ben Edward started to come into his own with 29c, 8p as well as 1t for 85 pts. Ian Ford made his debut and was to play an incredible 481 appearances up to 1966. He would play for Wales and also in Newport’s victorious team vs All Blacks in 1963 – the only defeat they suffered. Giant Ian was to prove to be truly a gentleman both on and off the field.

Ken Jones, Trevor Brewer, Malcolm Thomas, John Gwilliam (capt) – playing then for Edinburgh Wanderers – and RT Evans played for Wales in the Grand Slam season while Jones, Thomas and Evans were selected for the British Lions tour to New Zealand and Australia.