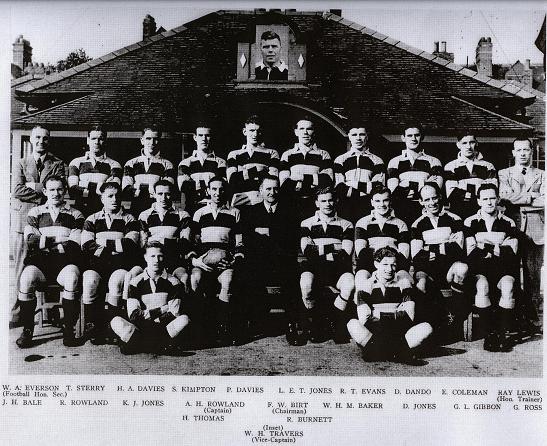 The inspirational and exciting Hedley Rowland took over the captaincy in 1948/9 and what a season it was to be with Newport playing some of their moist attractive rugby ever and attracting the biggest gates in their illustrious history. The success was reflected in the fact that 532 points were scored in 41 matches and only 170 conceded. Rowland’s consistent emphasis was on attack and this laid the foundation for future very successful seasons. Interestingly he was apparently not the unanimous choice as captain by the Newport RFC committee. Perhaps some didn’t like the fact that on his day he was just about the best three-quarter around but on his bad day…… ! He was to prove to be a very popular captain and also one of the most successful for some time. Once again Rowland missed games due to illness and missed 14 of the 41 matches played but in his absence the players did not let him down.

Rowland, in spite of missing many games, was still top try scorer with 21. He also managed 4 conversions. Newport had star half-backs in Haydn Thomas and Roy Burnett with “Twinkle toes” starting to really show his class and skill and benefiting from a super service from Thomas. Wings Graham Ross, Deryck Jones missed games due to injury and Ken Jones was at Loughborough and also played few games. Full-back Gerry Gibbons joined from Newbridge and played well late in the season. Backs Malcolm Thomas had joined the Royal Navy and Ken Spray was tied up at Cambridge University. A great loss was outside-half Jack Evans who turned professional with Hunslet RL after only playing the first 3 games. He eventually played for Great Britain RL. That great servant Alf Panting played 12 games filling in at full-back centre and wing.

Hooker Bunner Travers reluctantly came out of retirement but what a season he had and thus played in all 4 Wales internationals. Travers led the pack magnificently and they developed into on of the best units in the country. Sadly Travers suffered a back injury late in the season and played his last game vs Plymouth Albion on April 2nd 1949 and so ended the career on the player widely regarded as the best hooker ever to play the game. There were many great players in the pack not least of all Ernie Coleman, Peter Davies, Doug Dando, Bob Evans, Stewart Kimpton, LET Jones, and Tom Sterry.

Newport had gates of 19,500 and 24,000 for the two Cardiff games – one lost and one drawn and in fact the Old Enemy won 3 of the 4 matches played, 15,000 for the Watsonians and 14,000 for the Barbarians. The 7 games lost were vs Cardiff (3), Swansea, Neath, Gloucester and Barbarians.
The magnificent Roy Burnett led the appearances on 39 scoring 9 tries and 7 drop goals. Doug Dando played 36 games, LET Jones and Stewart Kimpton 33 and Hadyn Thomas 32. Future Wales wing made his debut and the great Wales and British Lion centre Jack Matthews played one match for Newport on Plymouth tour against Falmouth and the following day played for Penzance vs Newport ! Goal kicking was shared mainly between Peter Davies and Gwili Jenkins. 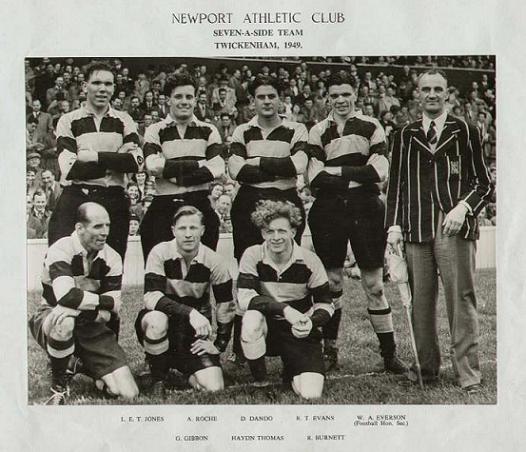