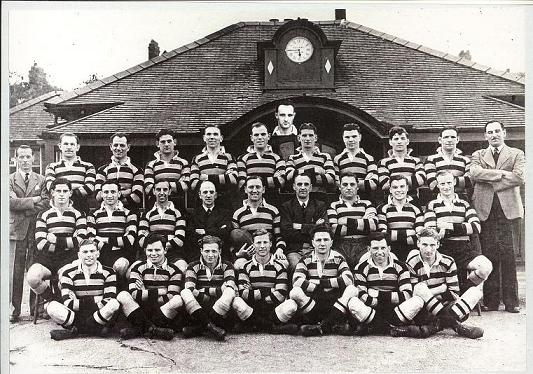 Gwili Jenkins, an excellent player, was elected captain in what was to be a topsy turvy season. Some great rugby was played but there were some unbelievable lapses not least the appalling start to the season when 5 games were lost in the first 8. Jenkins proved himself to be a good captain as Newport struggled to field a settled team and some 52 players were tried during the season. There were a number of fine players and the season saw the great Malcolm Thomas and Roy Burnett play major parts at the beginning of their distinguished careers. Hedley Rowland missed more than half of the season and was sorely missed. The initial half-backs were Jack Evans at outside half, partnered by first Tony Rees and then Haydn Thomas. The great Roy Burnett played his first match of the season against the Wasps on Dec 27th 1947 at Rodney Parade. He scored a try in Newport’s 25-0 win. Unfortunately Ken Jones got limited chances on the wing due to indifferent three-quarter play and only scored 9 tries. Hedley Rowland was top try scorer with 14 tries from his 21 games while top scorer was captain Gwili Jenkins with 135 pts (45c, 12p, 3t). He also made most appearances playing 42 of the 45 games. Originally a centre, his full-back play and kicking often saved Newport. Back-row Doug Dando from Newbridge made 40 appearances and was to give the club great service in the coming years switching with great success to prop. He was strong in the set pieces and good at the back of the line-out. Chepstow born 2nd row “Big Ben” Edwards made his debut. Interestingly he had a soccer trial with Birmingham City but his goal kicking talents were discovered later. Stalwart forwards such as Bill Jones (36 apps), Ernie Coleman (29 apps) Jack Bale (29 apps), RT (Bob) Evans (22 apps) and Peter Davies (22 apps) gave good service and their experience was invaluable. Prop Tom Sterry, another player who was to give great service, also played his part with 30 appearances in his first season. For the third time in history Cardiff beat Newport four times in a season. The 2nd match at Rodney Parade drew a crowd of 22,000 – a record attendance for a club match but the only close match was the 3rd match a Rodney Parade when Cardiff narrowly won 8-5. The Australians toured Great Britain and were a little fortunate in winning by 8-4 with Hedley Rowland getting Newport’s only score from a drop goal. The Wallabies great wing C Eastes broke his arm tackling Ken Jones about 15 mins from the end. Their great pack was duly matched by Newport’s 8 except in the line-out. Wing forward Bob Evans and half-backs Tony Rees and Jack Evans produced outstanding performances as did the whole Newport pack. One of Wales’s great captains John Gwilliam made 6 appearances and won his first cap from Cambridge University against Australia in Dec1947. He had made his Newport debut in 1945/6. He was only to make a total of 21 appearances for the Black & Ambers from 1945-1949. Newport started the season poorly and duly ended it the same losing their last 4 matches – all away – to Cardiff, Neath, Swansea and Newbridge. In between – from Nov 29th 1947 to April 3rd 1948 they only lost 2 matches out of 24 played.