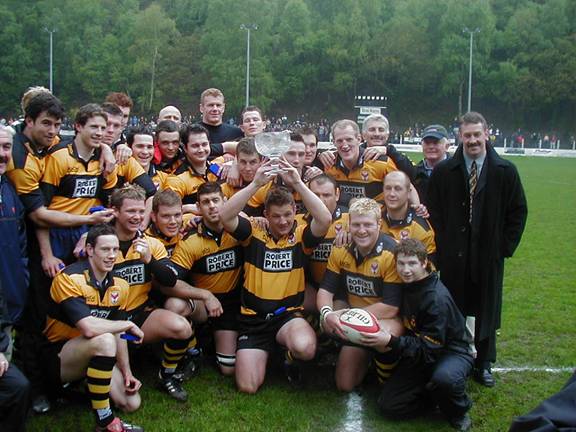 2003/4 saw the dawn of Regional rugby in Wales with the Premier sides reverting to a semi-professional status.

Stephen Jones in the Sunday Times said : “The total lack of knowledge about the realities of rugby in Europe held by many rugby people in the Southern Hemisphere is always a source of mild amusement and occasionally anger Steve Hansen’s support of the nonsensical creation of appalling conglomerate non-teams in place of the great club teams in Wales is just one example.”

Popular former Newport RFC scrum-half Ofisa Tonu’u said :”My contract was given to Gwent but I never signed with them. All the people who brought me in like Tony Brown and Ian McIntosh have gone. I could see Newport losing their grip now that they are not in control of it at all. It is now run by Ebbw Vale and I refuse to play for Ebbw Vale, a team that got relegated”

Darryl Jones, Director of Rugby took over the coaching role with Leigh Jones in support and the captaincy was given to promising youngster and Wales A squad player Gareth Gravell. Newport assembled a team of players with some 1st XV experience such as Llyr Lane, Scott Williams, Sam Waldron and Matt Veater, U21 players and some players who had 1st XV experience at other clubs. Among the new faces were Tongan international utility back Sione Tuipulotu (Caerphilly), former Wales A back Rhys Shorney (Ebbw Vale), former Wales A locks Chay Billen (Ebbw Vale capt) and Steve Martin (Neath), Wales 7’s back Craig Richards and prolific points scorer Dan Griffiths (Whitland). Former Newport captain Sven Cronk returned from Pontypridd.

After some pre-season friendly matches, the season kicked off on Sept 6th 2003 when Newport took on old Gwent rivals Pontypool at Rodney Parade in front of a crowd of nearly 4,000 which was impressive compared with the two regional games being played. Regional rugby may catch on but for now confusion reigns supreme both about names and aims. This was Newport and Pontypool playing in Gwent in the Premier Division but not for Gwent Dragons who could be renamed shortly.

After a tough first half with a wait until the 57th min for the first try which was a dashing break from wing Craig Richards. Newport ran out winners 32-16. The Newport faithful had voted with their feet and ignored the journey to watch the “Dragons” at Llanelli playing the “Scarlets”. It was all about the home side and the first win. By the time they went to the Gnoll they were still unbeaten having won 11 matches and drawn one but Neath ran out worthy winners 37-8. As the season progressed it became apparent that the Welsh Premier title would go either to Neath or Newport who at times played scintillating rugby. Neath had one last chance to take the title when they visited Newport on April 10th 2004. In a remarkable match and a credit to the Welsh Premier League, Newport came back from 20-3 down after only 25 mins to win 32-27 and so effectively clinch the Welsh Premier Championship for the first time. They ended with a record of W27 D1 L2 scoring a remarkable 142 tries and were unbeaten at Rodney Parade in league or cup games.

The only real disappointment was losing in the Welsh Cup at Cross Keys 6-3 following a poor performance from a very subdued Newport team. Interestingly they exited the Cup without having a single try scored against them in the 2 matches played. There were many players who stood out during the season, ex-region fullback Richard Davies, speedster wing Craig Richards, dependable centres Rhys Shorney, Scott Williams, prolific points scorer outside half Dan Griffiths. In the superb pack there were youngster props Rhys Thomas, Gethin Robinson, Dai Patterson, locks Steve Martin, Chay Billen, Matt Veater and back rows Sam Waldron, Rhys Jones and capt Gareth Gravell.

So ended a magnificent season with Craig Richards scoring 30 tries and becoming only the 6h player to score 30 or more tries for Newport RFC in a season. Dan Griffiths scored 337pts from 30 games. Scrum-half Llyr Lane and lock Matt Veater led the appearances with 32 followed by Gethin Robinson with 31 and then Rhys Shorney, Gareth Gravell and Rhys Jones, all with 30. Newport scored 1105 pts and 150 tries in 32 matches ie an average of nearly 5 tries per game with just 3 defeats, all away, at Neath, Cross Keys (cup) and Bedwas. There was just 1 draw – at Sardis Road when Newport came back from 0-10 down at HT to almost snatching the win.
During the season utility back Sione Tuipulotu was signed by the Dragons and centres Rhys Shorney and Hal Luscombe appeared for Newport RFC with centre Scott Williams and prop Rhys Thomas playing some games for the Dragons. In total 42 different players were used by Newport RFC. 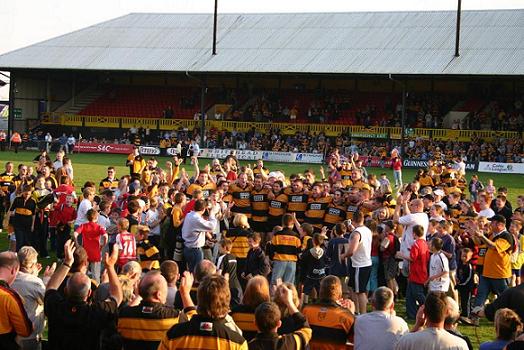 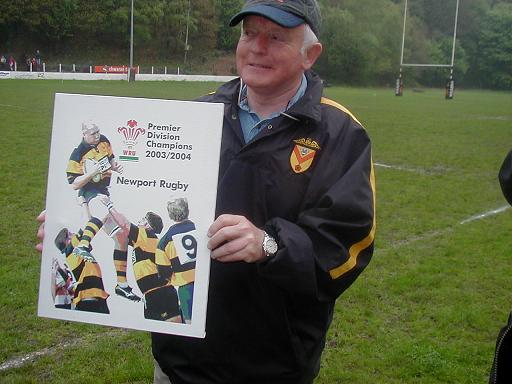