2004/5 saw Newport having to almost completely rebuild once more. They lost no fewer that 14 players from their highly successful side with many being offered more lucrative deals elsewhere including captain Gareth Gravell and coach Darryl Jones. Full-back Richard Davies, wing Craig Richards, scrum-half Llyr Lane and coach Darryl Jones went to Coventry RFC with Gravell hoping to go to Bayonne. Dan Griffiths turned down an offer from Bayonne and stayed with Newport RFC. As is usual the WRU continued to move goal posts with a threat that 3 sides would be relegated but the cynics said that it would depend on who finished in those positions !

Of the first 16 games played an incredible 12 games were played away and this resulted in 5 defeats and it was always going to be difficult to regain the Premier league title from then on especially as the WRU deducted 3pts for failing to play Llandovery at home. Newport stuck manfully to the task and started to play some very attractive rugby. They also beat the new Premier League champions Neath once more at Rodney Parade 31-14 on Apr 30th 2005 with a tremendous display. They disappointingly were knocked out of the Welsh Cup at Aberavon in the Q/F by18-17 having been 18-0 down at one time. Many felt that the non-availability of key scrum-half James Ireland, on regional duty the day before, was one of the key factors.

Newport can feel very satisfied with their season ending with the runners-up place in the Welsh Premier League. It was a very difficult season which started with a rebuilt team and new coaches and captain. Fixture clashes with the regional Newport Gwent Dragons side resulted in Newport having long runs of away games and the loss of key players at times. They scored 1053 pts and 152 tries from their 36 games and stretched their unbeaten home record to 37 matches – the last home defeat being against Neath on Feb 5th 2003. The pack was again outstanding with Matt Veater Sam Waldron, Nick Kelly, Neil Edwards and Rhys Jones to the fore but a lack of cutting edge behind at times proved to be costly although Gareth Chapman always looked dangerous. Young lock Ben Thomson proved to a real find and played for Wales U21 while Dan Griffiths also started to show well after an indifferent start to the season while scrum-half James Ireland, although at times erratic showed some real qualities. Wales U21 fullback Ricky Williams also looked a star in the making. Leading try scorer was Gareth Chapman with 15 tries while Dan Griffiths was again leading scorer with 304pts. 48 players were used during the season.

Popular Canadian and more recently NGD regional prop Rod Snow announced his retirement. He played 1 further game for Newport RFC against Swansea in April 2005 and then played in a testimonial match at Rodney Parade in May 2005. It was a very emotional farewell to Rod who had become one of the most popular players ever to wear the famous Black & Amber jersey. He had made 190 appearances and scored 30 tries for Newport RFC since 1995. 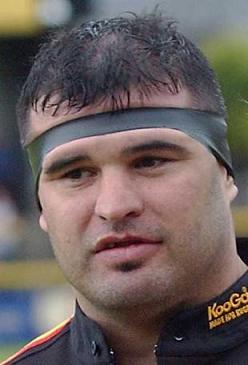