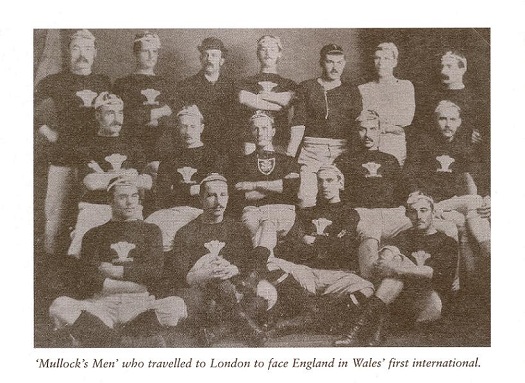 Will Phillips continued as captain in 1880/1. Dromio (W J T Collins) commented about this season as follows :

There was no more striking feature in connection with the 1880/1 season than the broadening of the bounds of selection. With the rise of new clubs it was recognised that the town club were duty bound to make the team as far as possible representative of the playing talent of the town. Through all the years since then football ability and good sportsmanship have been the passports to the Newport XV. No club has more successfully resisted the temptations of exclusiveness. If a man is a good player and a good sportsman that is all that is demanded.

Interestingly it was recorded that there was 4th practice match in which 15 of the last season played against the next XV captained by Mr CH Newman. The papers adds “We believe that Mr Newman’s side won, but our reporter failed to hear the score”.

There were wins against Blaina Ironsides, Merthyr, Rockleaze (Clifton), Pontypool (Cup 9g,0t-0), Weston Rangers, Irish Wanderers, Newport United, Gloucester and Cardiff . Drawn matches were against Weston Rangers and Gloucester while the 3 defeats were against Manchester Rangers, Cardiff (Cup – but scored 2 tries to 1g) and Clifton.

George Rosser played in all 14 matches, Harold Lyne in 13 and Will Phillips, F Dowdell, H Capel and W Young each played in 12 matches. George Rosser easily led the try scorers with 17 followed by J Jex Woods with 8.

Welsh Rugby Union (WFU) was founded at the Castle Hotel, Neath 1881 and Nwport were one of the founder members. There were representatives from 11 clubs : Bangor, Brecon, Cardiff, Lampeter, Llandeilo, Llandovery, Llanelli, Merthyr, Newport, Pontypool and Swansea

This season saw the first ever Wales team selected on Feb 19th 1881 – Wales vs England at Blackheath. The team was essentially selected by Newport’s Honorary Secretary Richard Mullock who was then secretary of WFU. Mullock palyed a big part in setting up the Wales Football Union (later to become WRU)  The team were ill prepared and due to a clash of cup matches in Wales not all players were available for selection and there were some players who declined to play as they did not think the side was representative of Wales.. Not surprising Wales lost 82-0. Newport provided 6 players including the captain – Australian born James Bevan. Records show that Bevan may have only played one match for Newport and was at Cambridge University at the time of his selection.