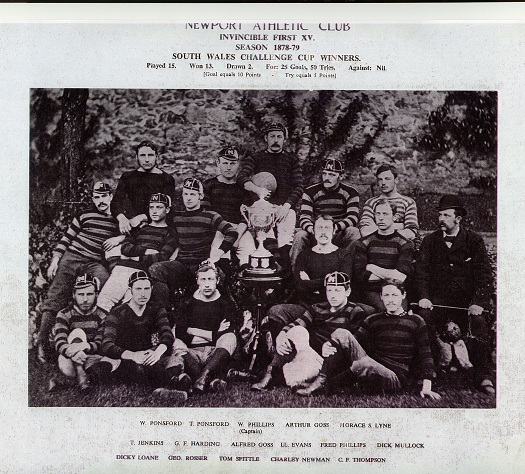 In 1878/9 under captain Will Phillips, Newport were again undefeated winning 14 and drawing 2 (1 abandoned as draw after 15 mins – player injury) of the 15 played. Incredibly they did not concede a single goal or try and scored 25g and 50 tries themselves. Newport invited

Manchester Athletic, Gloucester and Clifton- one of the strong sides of the west, to play them and so began those matches which have done so much for Welsh and English rugby football. Newport had big wins against Panteg, Brecon, Lampeter College, Merthyr, Cardiff, Neath and Swansea. In the match against Brecon they won by 6g, 11t (+19 minors) to 0 ie they scored 17 tries with a score at that time of 61-0 – today it would be 97-0.

The cup match against Lampeter on Dec 19th was played on fields on the south side of Bassaleg Road where part of Stow Park Circle now stands as the Athletic Ground was frozen.  In the cup Neath and Swansea had played each other 6 times without a result and the Cup Committee decided that Newport and Cardiff (Eastern Division leaders) should play in the final which Newport won. Neath and Swansea weren’t happy so Newport offered to play the winners of the 7th game between Neath and Swansea which was Neath by a minor. Newport then beat Neath 49-0 but Swansea said that Neath did not play as well as they did against them and so Newport then offered to play Swansea and then won 48-0 !

26 players were called on for the season but practically the same 15 were used for most matches. Horace Lyne, D Llewellyn Evans, C F Thompson, Will Phillips, George Rosser, E Jenkins, W Ponsford, Alfred Goss, Arthur Goss and G F Harding played in nearly all the matches.

Note :  In April 1879, John Butcher became groundsman and continued until his death in Feb 1916.